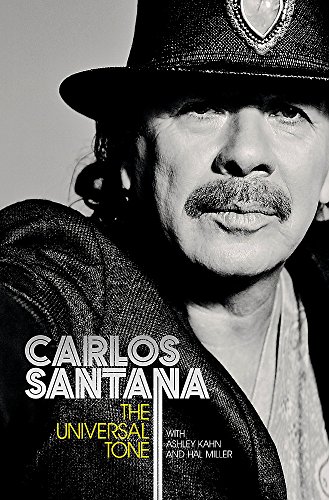 The Universal Tone
by Carlos Santana

The Universal Tone by Carlos Santana

The intimate and long-awaited memoir of guitar legend Carlos Santana.

In 1967 at the Fillmore Auditorium in San Francisco, just a few weeks after the Summer of Love, a young Mexican guitarist played a blistering solo that announced the arrival of a prodigious musical talent. Two years later he played an historic set at Woodstock and the world came to know Carlos Santana, his instantly recognizable guitar sound, and the band that blended electric blues, psychedelic rock, Latin and modern jazz-?the band that still bears his name.

Carlos Santana's memoir offers a page-turning tale of musical self-determination and inner self-discovery, and is filled with colourful detail and life-affirming stories. THE UNIVERSAL TONE traces his journey from his earliest days playing the strip bars in Tijuana while barely in his teens and brings to light the establishment of his signature guitar sound; his roles as a husband, father and rock guitar star; his indebtedness to musical and spiritual leaders-from John Coltrane and John Lee Hooker to Miles Davis and Harry Belafonte; and the deep, lifelong path he developed from his Catholic upbringing, Eastern philosophies and other mystical sources. It includes his recording some of the most influential rock albums of all time, up to and beyond the 1999 sensation SUPERNATURAL, which garnered nine Grammy Awards and stands as arguably the most amazing career comeback in popular music history.

THE UNIVERSAL TONE offers an inspiring story of musical fearlessness that finds humour in the world of high-flying fame, speaks plainly of personal revelations, and celebrates the divine and infinite possibility Santana sees in each person he meets.

Santana's journey from obscurity and abject poverty to affluence and superstardom is expressed eloquently via an informal conversational style that captures the cadences of his speaking voice ... there's plenty of humour - and tales of rock 'n' roll excess - to offset any overriding sense of sobriety -- Charles Waring * MOJO *
[A] testament to [Carlos Santana's] geniality. * NEW STATESMAN *
Once you start to explore his life, you will not be able to put the book down * THE BEAT MAGAZINE *
In this frank and impassioned memoir, iconic, influential musician Santana ... known for fusing rock and Latin rhythms, weaves together the rhythmic, domestic and spiritual dimensions of his career. Generously reflective and well-balanced ... Charismatic and soulful ... An appreciative and unpretentious chronicle, this is required reading for Santana fans and devotees of classic rock legends * KIRKUS REVIEWS *

CARLOS SANTANA was born in Autlan de Navarro, Mexico, in 1947. He is a guitarist, songwriter and founding member of Santana. He has recorded or appeared on more than ninety albums. He lives in Las Vegas with his wife, the drummer Cindy Blackman.

GOR006727770
The Universal Tone by Carlos Santana
Carlos Santana
Used - Very Good
Hardback
Orion Publishing Co
2014-11-06
320
1409156532
9781409156536
N/A
Book picture is for illustrative purposes only, actual binding, cover or edition may vary.
This is a used book - there is no escaping the fact it has been read by someone else and it will show signs of wear and previous use. Overall we expect it to be in very good condition, but if you are not entirely satisfied please get in touch with us.