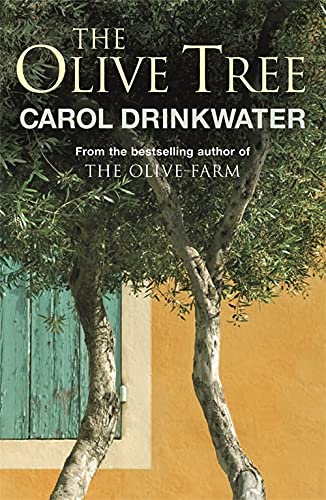 The Olive Tree
by Carol Drinkwater

Used Price
$9.19
Free Shipping in the US
In the bestselling Olive series by writer and actress Carol Drinkwater, author of THE FORGOTTEN SUMMER
Reviews:
Trustpilot
Very Good Good

The Olive Tree by Carol Drinkwater

Fifth volume in the bestselling Olive series by writer and actress Carol Drinkwater.

THE OLIVE TREE charts Carol Drinkwater's colourful and often dangerous journey in search of the routes that olive cultivation has taken over the centuries. Set during a springtime Mediterranean that is evocative and perennial, it is above all a tale of our time.

Troubled by challenges her own South of France farm is experiencing, Carol realises new approaches to farming are becoming essential.
Her quest takes her south through Spain, Morocco, Algeria and Italy before she finally returns to her farm.

Through her travels and vivid encounters, Carol confronts some of the critical issues of our time - land-care and the harsh realities of diminishing water reserves - and ends her momentous journey in the company of olive growers whose vision for the future is remarkable and ingenious.

Her writing captures the true spirit of the people and places she visits -- Carolyn Boyd * TIMES *
An honest tale that brings to life the sights, smells and tastes of the Mediterranean. * LIVING SPAIN *
`the story contains some wonderfully evocative vignettes, written in prose that ignites the reader?s imagination' -- Jane Duru * GLOBALISTA *
Drinkwater's passion and curiosity are contagious...lively prose holds unexpectedly poetic bursts and an insightful account of how the Mediterranean treats a woman travelling alone -- Kathleen Wyatt * TIMES *
Carol Drinkwater has gone in search of olive growers in the west Mediterranean, documenting her travels and travails with good humour and not a little fortitude. -- CHOICE
'The Olive Tree is a thrilling tale tracing the journey of olive cultivation' -- Paul Blezard * THE LADY *
a tale of one lady's courageous, unusual and intrepid journey around the Mediterranean in the pursuit of something so many of us give little thought to in this country * REAL TRAVEL *
The Olive Tree is travel writing of the highest order -- Jenny Crwys-Williams * The Book Show, Radio 702 (South Africa) *
Gripping and passionate * GOOD BOOK GUIDE *
Her writing is often lyrical and unexpectedly poetic, making this book a surefire hit on many levels. * THE WEEKENDER (South Africa) *

Best known for her role as Helen Herriot in BBC Television's ALL CREATURES GREAT AND SMALL (for which she was awarded THE VARIETY CLUB TELEVISION PERSONALITY OF THE YEAR AWARD), Carol Drinkwater has enjoyed a long and distinguished career as both an actress and writer. During her acting career she has worked in film, television and theatre. Her credits include working with Laurence Olivier at the National Theatre and Stanley Kubrick on A CLOCKWORK ORANGE.

Carol is the author of six bestselling memoirs: THE OLIVE FARM, THE OLIVE SEASON, THE OLIVE HARVEST, THE OLIVE ROUTE, THE OLIVE TREE and RETURN TO THE OLICE FARM. Carol worked with UNESCO on a lavish documentary film series inspired by her two most recent books, THE OLIVE ROUTE and THE OLIVE TREE. The series is both travel and history based and will follow an Olive Heritage Trail around the Mediterranean Basin. The aim is to celebrate the cultural heritage of this sacred tree. The first transmissions will be in Canada in February and in Germany in April 2013.

GOR001246561
The Olive Tree by Carol Drinkwater
Carol Drinkwater
Used - Very Good
Paperback
Orion Publishing Co
2009-06-11
448
0753826127
9780753826126
N/A
Book picture is for illustrative purposes only, actual binding, cover or edition may vary.
This is a used book - there is no escaping the fact it has been read by someone else and it will show signs of wear and previous use. Overall we expect it to be in very good condition, but if you are not entirely satisfied please get in touch with us.