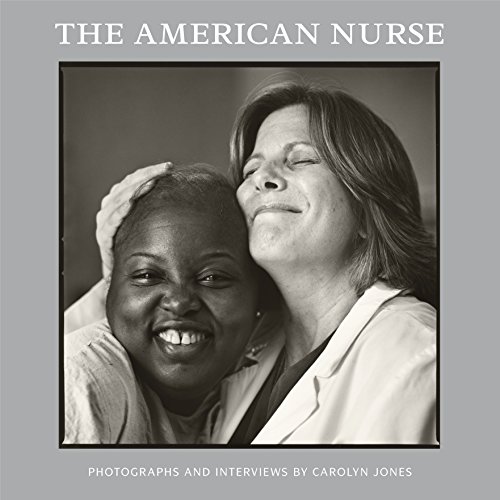 This extraordinary book of 75 portraits, interviews, and biographies is the result of the American Nurse Project, an endeavor launched by Fresenius Kabi, a worldwide leader in infusion therapy, IV generic drugs, and clinical nutrition. Enlisting the talents of Carolyn Jones, an award-winning filmmaker and creator of numerous photography books, and her producer, Lisa Frank, the project set out to capture and share the images and stories of nurses from all across America and to celebrate the role of the nurse in this country's health care system.

In The American Nurse, readers are invited to think about nurses in a way that they may never have before, unless they have been under a nurse's care. This body of work will inspire audiences to focus their attention on the nurses who serve as healers in their community, and whose wealth of knowledge needs to be tapped in order to solve today's pressing health care issues.

The challenge of creating a rich portrait of nursing in America began with a map of the U.S. and a red pen. Carolyn Jones wanted to cover as much territory as possible, with the hope that along the way she would capture stories touching on the kinds of issues that nurses are dealing with in every corner of the country. Some of the issues might be specific to a particular area, like the nurses who were charged with evacuating patients in the aftermath of Hurricane Katrina. Others would be universal no matter where Jones visited, such as nurses providing emotional support to patients and families to help get them through the toughest times in their lives.

The journey began in New York City, where Carolyn met nurses working in the district with the highest rate of hunger in the U.S., as well as nurses doing health outreach to at-risk teens. She moved southward, stopping in Baltimore to meet nurses on the cutting edge of healthcare and nurse educators training the next generation, and then travelled to San Diego, where she met nurses at a VA hospital that is home to the largest concentration of veterans from the Iraq and Afghanistan conflicts. In Louisiana, she went behind bars and met nurses dealing with prisoners; and in Riverton, Wyoming she learned about the health needs of the Native American population there. Having crisscrossed the country, from rural Eastern Kentucky to Florida to New Orleans to Nebraska to Wisconsin to San Francisco and Chicago, Jones presents a compelling portrait of a key figure on the front lines of health care today: the American nurse.

"When a book is heavy with glossy photographs, you seldom expect too much from its words. In "The American Nurse," though, it's the narrative that hits you in the solar plexus...Young people with kind hearts and uncertain futures might just sit themselves down with the book, or wander through the Web site featuring its video interviews, www.americannurseproject.com, and see what happens."
-- Abigail Zuger, M.D., Health, New York Times, October 29, 2012. Read the full artilce: http: //bit.ly/Vnp1ES

If you were ever hospitalized or spent time around someone who was, you know how important a caring, hardworking nurse can be. Nurses are often lauded as heroic and deserving respect, but not often are these heroes revered for who they are as individuals - as human beings doing an often rewarding, sometimes impossibly difficult job in service to those who need dare. Photographer and writer Carolyn Jones has taken the acknowledgment of these wonderful souls to the next level, profiling 73 nurses from around the country. Each spread in this hefty volume presents the story and portrait of a single nurse. As one interviewee put it, "Every one is special. Everyone has a story." Jones understands that each of these caregivers is unique and humble, honoring them with eloquent interviews and honest portraits. - Amanda Quintenz-Fiedler, Photographer's Forum, Spring 2013

"Carolyn Jones's The American Nurse is a beautiful and moving testament to the soulful, selfless caregiving that nurses work hard to provide. A book filled with love, determination, and hope, it showcases the rewards that come from dedicating oneself to the needs of others."
-- Theresa Brown, New York Times columnist "Bedside" and author of Critical Care.

"...a coffee table book filled with exquisite black-and-white portraits accompanied by at times dramatic, and at other times slice-of-life, stories, told by the nurses themselves. They are stories worth reading--and sharing."
--Susan Trossman, RN, The American Nurse Magazine, January/February 2013

"The American Nurse" is an extraordinary book and journey through the expansiveness of nursing and nurses themselves. The stories and images are inspiring and very real, and we believe the book has an important role to play in capturing what we call in our mission, 'the power of nursing.'"
--American Nurse Foundation Executive Director Kate Judge, as quoted in The American Nurse Magazine, January/February 2013

"Anyone lucky enough to be photographed by Carolyn Jones knows what I know: her profound empathy draws the story forth. I can't imagine a more perfect union than Carolyn Jones and these heroic nurses."
-- Geraldine Laybourne, founder Oxygen Media.

"Nurses are the hands, feet, and face of care in the healthcare industry. Carolyn Jones honors not only their actions but their hearts and minds in The American Nurse...Their tender stories and faces will stick with readers."
-- Melissa Anne Wuske, ForeWord Reviews, Winter 2012.

"You don't have to be a nurse to enjoy reading this book. Anyone who knows a nurse, has been cared for by a nurse, or is a nurse will love these nurses telling their stories of why they do what they do. I laughed and cried and wanted to read more. I am a nurse and have read many books and seen many tv shows and movies portraying nurses in many ways. This book finally captures the nurse as who they are and what they do everyday. It's just an uplifting and validating read. I can't recommend it highly enough."
-- Michelle08, Nurse, Amazon.com review

Thank you for bringing this project and book to our attention. The book is the perfect gift for my daughter who is receiving her MSN from SF state in December. She is fully aware of the competition for new grads in the Bay Area and has interviews in Idaho and Utah. Being a nurse working with children and babies is a life long dream and we know she is entering this rewarding profession for the "right reasons". - Sally Drummond, comment posted by listener on Forum with Micheal Krasny website after Carolyn Jones and Rhonda Collins appearance on the show. Hear the show here: http: //bit.ly/TydnCZ

Known internationally for her socially proactive medium- format photographic portraiture, Carolyn Jones is also an award-winning filmmaker, having worked in a wide variety of film and video formats, primarily in documentary pro- duction. Her most widely acclaimed book, Living Proof: Courage in the Face of AIDS, was published by Abbeville Press and was accompanied by shows in Tokyo, Berlin, the U.S. and the United Nations World AIDS Conference. In addition to her multiple exhibitions, book and magazine publications, Carolyn has collaborated on projects with Oxygen Media, PBS, the Girl Scouts of the USA, and an ex- tensive list of corporate clients. She founded the non-profit 100 People Foundation for which she travels the world tell- ing stories that celebrate our global neighbors.

GOR010334752
The American Nurse by Carolyn Jones (Austin, Texas)
Carolyn Jones (Austin, Texas)
Used - Very Good
Hardback
Rizzoli International Publications
2012-10-30
180
1599621215
9781599621210
Commended for IndieFab awards (Social Science) 2012
Book picture is for illustrative purposes only, actual binding, cover or edition may vary.
This is a used book - there is no escaping the fact it has been read by someone else and it will show signs of wear and previous use. Overall we expect it to be in very good condition, but if you are not entirely satisfied please get in touch with us.