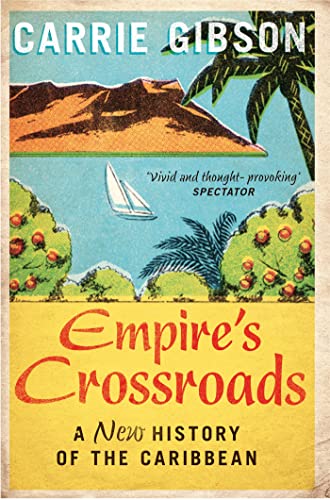 Used Price
9,39 $
Free Shipping in the US
A brilliant new history of the Caribbean
Reviews:
Trustpilot
Very Good

Empire's Crossroads: A New History of the Caribbean by Carrie Gibson

In Empire's Crossroads, Carrie Gibson offers readers a vivid, authoritative and action-packed history of the Caribbean. For Gibson, everything was created in the West Indies: the Europe of today, its financial foundations built with sugar money: the factories and mills built as a result of the work of slaves thousands of miles away; the idea of true equality as espoused in Saint Domingue in the 1790s; the slow progress to independence; and even globalization and migration, with the ships passing to and fro taking people and goods in all possible directions, hundreds of years before the term 'globalization' was coined.

From Cuba to Haiti, from Dominica to Martinique, from Jamaica to Trinidad, the story of the Caribbean is not simply the story of slaves and masters - but of fortune-seekers and pirates, scientists and servants, travellers and tourists. It is not only a story of imperial expansion - European and American - but of global connections, and also of life as it is lived in the islands, both in the past and today.

Vivid and thought-provoking * Spectator *
Carrie Gibson manages to weave 500 years of complex history into a brilliant narrative ... [A] strikingly assured debut. * Observer *
Carrie Gibson has written a compelling history of the Caribbean, rightly placing it at the heart of European imperialism. This is a gripping account by a gifted scholar and story-teller -- Tristram Hunt
A fine introduction to the history of a turbulent and fascinating region * The Times *
Carrie Gibson has written a judicious, readable and extremely well-informed account of a part of the world whose history is seldom acknowledged. Too many people know the Caribbean only as a tourist destination; she takes us, instead, into its fascinating, complex and often tragic past. No vacation there will ever feel quite the same again. -- Adam Hochschild, author of King Leopold's Ghost
Sharp, gripping ... packed with the stories of tyrants and insurgents, and images of violence and beauty ... A great read about some fantastically absorbing - and to many people, little-known - history ... An exceptionally impressive debut. -- Alex von Tunzelman * Literary Review *

Carrie Gibson completed her doctorate, on the Spanish Caribbean, at the University of Cambridge. She has worked as a journalist for the Guardian and spent many months living in the Caribbean researching in the archives of Cuba, Puerto Rico and the Dominican Republican. She lives in London and Washington D.C. This is her first book.

GOR006731744
Empire's Crossroads: A New History of the Caribbean by Carrie Gibson
Carrie Gibson
Used - Very Good
Paperback
Pan Macmillan
2015-03-26
480
1447217284
9781447217282
N/A
Book picture is for illustrative purposes only, actual binding, cover or edition may vary.
This is a used book - there is no escaping the fact it has been read by someone else and it will show signs of wear and previous use. Overall we expect it to be in very good condition, but if you are not entirely satisfied please get in touch with us.