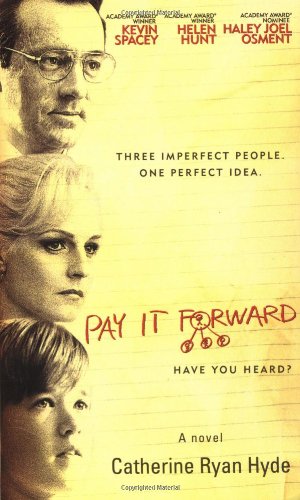 It all started with the social studies teacher's extra-credit assignment: come up with a plan to change the world for the better, and do it. Twelve-year-old Trevor McKinney began by doing something good for three people. But instead of paying him back, he asked them to "pay it forward" by doing a favor for three more people, who in turn would help three others, and so on, each act a link in a chain of human kindness.

And no one -- not his teacher, his mom, or anyone in his small California town -- could ever have dreamed of how far Trevor's plan would go.

[An] entertaining and inspirational tale.

[ An] entertaining and inspirational tale.

An uplifting, tear-jerking, and inspiring modern fable, with an extremely appealing young protagonist.

Catherine Ryan Hyde accomplishes a very difficult job, with an easy, beneficent wisdom about the ways of the world.

The story is a quick read, told with lean sentences and an edge....Hyde pulls off a poignant, gutsy ending without bathos.

Hyde makes the unbelievable seem possible in a beautifully written, heartwarming story of one boy's belief in the goodness of humanity.

[ A] winning novel....Hyde's Capra-esque theme -- that one person can make a difference -- may be sentimental, but for once, that's a virtue.

The philosophy behind the book is so intriguing, and the optimism so contagious, that the reader is carried along with what turns out to be a book that lingers long after the last page is turned.

[ A] fascinating idea...well-written...the characters are interesting and complex and flawed and real...."Pay It Forward" will get you thinking outside of its pages, as few books do.

"Pay It Forward" is reminiscent of Frank Capra's "It's a Wonderful Life," Like the [ Capra] film, this novel has a steely core of gritty reality beneath its optimism....It takes courage to write so unabashedly hopeful a story in such cynical times.

CIN000114598
Pay it Forward by Catherine Ryan Hyde
Catherine Ryan Hyde
Used - Very Good
Paperback
Simon & Schuster
2000-10-31
311
0743412028
9780743412025
N/A
Book picture is for illustrative purposes only, actual binding, cover or edition may vary.
This is a used book - there is no escaping the fact it has been read by someone else and it will show signs of wear and previous use. Overall we expect it to be in very good condition, but if you are not entirely satisfied please get in touch with us.