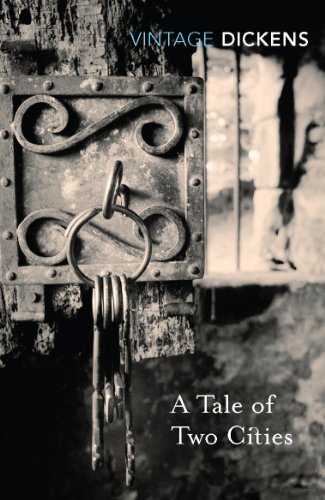 A Tale of Two Cities
by Charles Dickens

Lucie Manette has been separated from her father for eighteen years while he languished in Paris's most feared prison, the Bastille.

A Tale of Two Cities Summary

A Tale of Two Cities by Charles Dickens

Lucie Manette has been separated from her father for eighteen years while he languished in Paris's most feared prison, the Bastille. Finally reunited, the Manettes' fortunes become inextricably intertwined with those of two men, the heroic aristocrat Darnay and the dissolute lawyer Carton. Their story, which encompasses violence, revenge, love and redemption, is grippingly played out against the backdrop of the terrifying brutality of the French Revolution.

A Tale of Two Cities Reviews

It is really one of his best. There are passages so spattered with violence and blood that you look out for the red blotches on the page in front of you...brilliantly plotted -- A.N. Wilson * Daily Telegraph *
Dickens's story of love, espionage and Anglo-French relations * Scotsman *
When I was very much younger I used to think that A Tale of Two Cities by Charles Dickens was the most wonderful book in all the world. I was particularly moved by Sydney Carton dying in the place of Charles Evremonde and thought this was a wonderful act but, in fact, of course in later years if you read it, it becomes an incredibly selfish act -- Anne Widdecombe * Independent *
Dickens writes about Parisian and London society with such grittiness and truth, you become immersed -- Anne Charleston (Madge from Neighbours!!)
Dickens's magnificent account of the revolution and one of his best (and shortest) novels * Observer *

GOR001595472
A Tale of Two Cities by Charles Dickens
Charles Dickens
Used - Very Good
Paperback
Vintage Publishing
2008-09-04
448
0099511851
9780099511854
N/A
Book picture is for illustrative purposes only, actual binding, cover or edition may vary.
This is a used book - there is no escaping the fact it has been read by someone else and it will show signs of wear and previous use. Overall we expect it to be in very good condition, but if you are not entirely satisfied please get in touch with us.