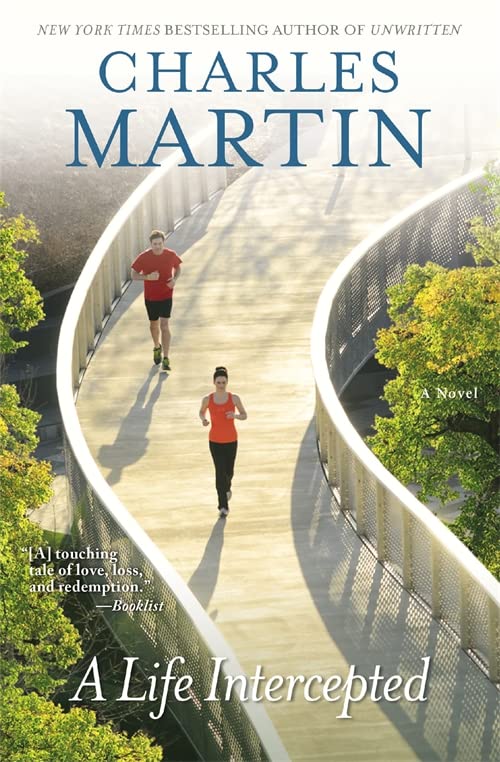 A Life Intercepted
by Charles Martin

Used Price
$29.99
Free Shipping in the US
From New York Times bestselling author Charles Martin, when a man wins everything only to lose it, he recognises the love of his life is the only thing worth having.
Very Good

A Life Intercepted by Charles Martin

Twelve years ago Matthew 'The Rocket' Rising had it all. Married to his high school sweetheart and graduating as one of the winningest quarterbacks in the history of college football, he was selected as the #1 pick in the NFL. But on the night of the draft, after reaching the pinnacle of success he plummeted. Accused of a crime with irrefutable evidence, he lost everything; his career; his reputation; his freedom; and the love of his life.

Having served his sentence and never played a down of professional football, he walks out of prison with one goal - to win back his wife, Audrey, whom no one has seen since the trial. He returns to an unwelcoming reception from his hometown only to discover that Audrey has taken shelter from media and the outside world at a convent. As chance would have it, there she has found a young man with the ability to have the football career Matthew should have had. All he needs is the right coach. Though helping the boy means Matthew violates the conditions of his release and, if discovered, will be forced to return to prison for the rest of his life. He's willing to take this singular chance to prove his innocence and win back Audrey's love.

"A beautiful story of love, redemption, and football. A winning combination." Library Journal"
"Martin is the new king of the romantic novel. . ..A Life Intercepted is a book that will swallow you up and keep you spellbound." Jackie K Cooper, Book Critic, The Huffington Post"
"This deeply personal labor of love has all of the hallmarks of Martin's amazing writing....[D]on't miss this wonderfully written book." RT Book Reviews"
"A touching tale of love, loss, and redemption." Booklist"
"Charles Martin's latest, A Life Intercepted, takes the football novel to the next level....A modern classic." The Florida Times-Union"
"Could easily be ripped from today's headlines. A moving story of lost dreams, unending love, truth seeking and in the end, inspiring redemption. This one is not to be missed!" Michael Morris, author of Man in the Blue Moon and A Place Called Wiregrass"
"Martin's story charges headlong into the sentimental territory-and best-seller terrain-of The Notebook, which doubtless will mean major studio screen treatment." Kirkus (starred review) on Unwritten"
"A spellbinding novel...Charles Martin took the threads of his storyline and wrapped them around my heart. His unforgettable characters captivate as they confront their hidden pasts and build upon their futures with faith, friendship, and grace." Elin Hilderbrand, author of Beautiful Day on Unwritten"
"Charles Martin's latest novel brings to mind the storytelling traditions of Nicholas Sparks and John Grisham. UNWRITTEN is a novel for the heart but it's also one of adventure....UNWRITTEN is a page turner and has all the ingredients to become a box office smash." Michael Morris, author of Man in the Blue Moon on Unwritten"
"I found Unwritten one of those strangely beautiful, exotically original novels whose substance dawns slowly to the reader's consciousness like a glorious sunrise. Do not start this book unless you have time to savor, reflect, and renew. Do, if you have space to fit a memorable reading experience into your life." Leila Meacham, author of Tumbleweeds on Unwritten"

Charles Martin is a New York Times bestselling author of nine previous novels. His work has been translated into seventeen languages. When not writing, his hobbies include bow hunting, working out (a blend of old school stuff and martial arts, called Fight Fit) and Tae Kwon Do, in which he currently has a black belt, though he notes he is the 'least flexible person you've ever met.' He lives with his wife Christy, and their three sons in Jacksonville, Florida.

GOR009482477
A Life Intercepted by Charles Martin
Charles Martin
Used - Very Good
Hardback
Little, Brown & Company
2014-09-02
336
1455554669
9781455554669
N/A
Book picture is for illustrative purposes only, actual binding, cover or edition may vary.
This is a used book - there is no escaping the fact it has been read by someone else and it will show signs of wear and previous use. Overall we expect it to be in very good condition, but if you are not entirely satisfied please get in touch with us.