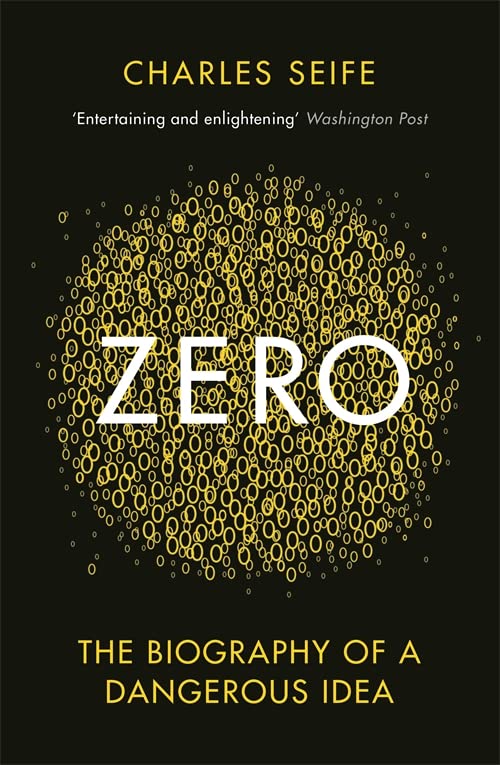 In Stock
$10.69
The Babylonians invented it, the Greeks banned it, the Hindus worshiped it, and the Church used it to fend off heretics. Today, zero lies at the heart of one of the biggest scientific controversies of all time, the quest for the theory of everything. Line illustrations.
Very Good
Only 4 left

Zero: The Biography of a Dangerous Idea by Charles Seife

A NEW YORK TIMES NOTABLE BOOK The Babylonians invented it, the Greeks banned it, the Hindus worshipped it, and the Christian Church used it to fend off heretics. Today it's a timebomb ticking in the heart of astrophysics. For zero, infinity's twin, is not like other numbers. It is both nothing and everything. Zero has pitted East against West and faith against reason, and its intransigence persists in the dark core of a black hole and the brilliant flash of the Big Bang. Today, zero lies at the heart of one of the biggest scientific controversies of all time: the quest for a theory of everything. Within the concept of zero lies a philosophical and scientific history of humanity. Charles Seife's elegant and witty account takes us from Aristotle to superstring theory by way of Egyptian geometry, Kabbalism, Einstein, the Chandrasekhar limit and Stephen Hawking. Covering centuries of thought, it is a concise tour of a world of ideas, bound up in the simple notion of nothing.

This is one of the best-written popular science books to have come this way for quite a while. -- Nicholas Lezard * Guardian *
A witty but lucid account... A must for armchair logicians. * Focus *
A breathless tour of the 'dangerous idea' of zero. * New Scientist *
Seife is a gifted explicator of hard science. * Spectator *
Moves from Pythagoras to Hawking, accompanying his arguments with well laid-out graphs. A painless way to acquire complex knowledge. * Catholic Herald *

Charles Seife, a professor of journalism at NYU's Arthur L. Carter Journalism Institute, has been writing about physics and mathematics for two decades. He is the author of six books, Zero: The Biography of a Dangerous Idea, which won a PEN/Martha Albrand Award; Alpha & Omega: The Search for the Beginning and End of the Universe; Decoding the Universe: How the New Science of Information is Explaining Everything in the Cosmos, From Our Brains to Black Holes; Sun in a Bottle: The Strange History of Fusion and the Science of Wishful Thinking, which won the 2009 Davis Prize from the History of Science Society; Proofiness: The Dark Arts of Mathematical Deception; and Virtual Unreality: Just Because the Internet Told You So, How Do You Know It's True? Seife holds an A.B. in mathematics from Princeton University, an M.S. in mathematics from Yale University, and an M.S. in journalism from Columbia University. He lives in New York City with his wife, Meridith, and his children, Eliza and Daniel.

GOR001248180
Zero: The Biography of a Dangerous Idea by Charles Seife
Charles Seife
Used - Very Good
Paperback
Profile Books Ltd
2000-10-12
256
0285635948
9780285635944
N/A
Book picture is for illustrative purposes only, actual binding, cover or edition may vary.
This is a used book - there is no escaping the fact it has been read by someone else and it will show signs of wear and previous use. Overall we expect it to be in very good condition, but if you are not entirely satisfied please get in touch with us.