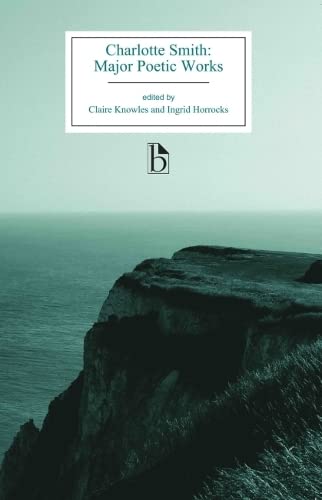 Immensely popular with contemporary readers, Smith's major poetic works are foundational poetic texts of the Romantic period. Smith's innovations in poetic form have also placed her at the forefront of twenty-first century scholarship on the period. This edition presents her three major poetic works - Elegiac Sonnets (1784-1800), The Emigrants (1793), and Beachy Head (1807). They also remain major texts for thinking through such questions as the relationship between public and private; the ethical treatment of refugees and other persecuted people; the position of women in a patriarchal society; and the usefulness of science as a way of making sense of a complex and ever-changing world.

This Broadview edition includes a new critical introduction which takes into account the developments in scholarship on Smith's work and women's writing over the past three decades, and it provides readers with a wealth of contextual material for understanding the writer and the social and literary environment within which she wrote, including key works by her precursors and contemporaries, selections from her letters, and reviews of her poetry.

"This welcome edition of Smith's poetry renders her verse readily comprehensible to those new to it while simultaneously fostering ongoing scholarship. It provides all of the major poems and deftly situates them within multiple illuminating contexts, including a vital appendix that details how Elegiac Sonnets grew across successive editions. The editors' lucid introduction to Smith's life, career, and verse offers an innovative account of the poetic persona that won her popular attention. A scrupulous editorial framework consisting of informative footnotes, the illustrations to Elegiac Sonnets, and valuable appendices will facilitate study of her work at every level. This edition will contribute to flourishing attention to Smith's poetry among those pursuing feminist, historicist, ecocritical, and formalist approaches to the period." --Sarah Zimmerman, Fordham University

"In their introduction to this invaluable edition, Claire Knowles and Ingrid Horrocks make a strong case for the vital importance of Charlotte Smith's poetry to both the literary and the socio-political history of the Romantic era. They also show her to be a cosmopolitan poet whose internationalist perspectives and sympathies resonate today. Smith scholars will welcome the comprehensive bibliography as well as the breakdown of the nine Elegiac Sonnets editions that clarifies the publication history of this evolving work. The judiciously chosen appendices reveal Smith as a lodestone of late-eighteenth-century British culture--a writer who revived the English sonnet, mastered blank verse, earned the respect of reviewers, and inspired countless fellow poets to honor her in verse." --Kari Lokke, University of California, Davis

"Charlotte Smith: The Major Poetic Works is a well-contoured new Broadview volume edited by Claire Knowles and Ingrid Horrocks. The 'major poetic works'--Elegiac Sonnets, The Emigrants and the posthumous Beachy Head--set one another off to advantage, showcasing Smith's formal and perspectival versatility, not to mention the dramatic flair and sense of irony that enliven her fiction and plays. Knowles and Horrocks capably survey the Smith criticism that has accumulated in the three decades since her initiation into the Romantic canon. ... The poems themselves are thoughtfully edited, while the appendices lay out a rich context for Smith's work, fulfilling the editors' expressed 'hope' that their own readers will 'gain a sense of the writer herself and a better understanding of the powerful reaction she evoked from the late-eighteenth- and early-nineteenth-century reading public' (p. 42). Appendix B is especially nourishing: well-chosen selections from John Thelwall, Mary Robinson, and Coleridge place Smith in the context of contemporary debate about the 'legitimate sonnet.'" -- Jayne Lewis, Recent Studies in the Restoration and Eighteenth Century

Claire Knowles is a Lecturer in English at La Trobe University.

Ingrid Horrocks is a Senior Lecturer in English at Massey University.

CIN000409421
Charlotte Smith: The Major Poetic Works (1784-1807) by Charlotte Smith
Charlotte Smith
Broadview Editions
Used - Like New
Paperback
Broadview Press Ltd
2017-06-30
275
1554812844
9781554812844
N/A
Book picture is for illustrative purposes only, actual binding, cover or edition may vary.
The book has been read, but looks new. The book cover has no visible wear, and the dust jacket is included if applicable. No missing or damaged pages, no tears, possible very minimal creasing, no underlining or highlighting of text, and no writing in the margins.