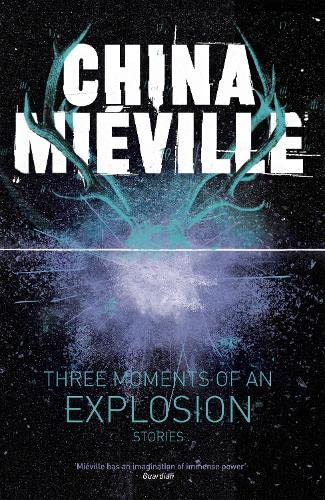 Three Moments of an Explosion: Stories
by China Mieville

Used Price
$17.99
Free Shipping in the US
A highly anticipated collection of short fiction listed in the Guardian's 'Essential Literary Calendar' for 2015 from one of the most exciting and original authors writing today.
Reviews:
Trustpilot
Very Good

Three Moments of an Explosion: Stories by China Mieville

The multi-award-winning China Mieville has been called 'the equal of David Mitchell or Zadie Smith' (Scotland on Sunday), whose 'inventiveness and precision is awesome' (Independent), and who writes with 'an imagination of immense power' (Guardian). In this extraordinary series of stories, defying definitions and literary stereotyping, he once again proves why he 'is one of the most interesting and promising writers to appear in the last few years in any genre' (Carlos Ruiz Zafon).

In these twenty-eight short stories, glistening icebergs float above urban horizons; a burning stag runs wild through the city; the ruins of industry emerge unsteadily from the sea; and the abandoned generations in a decayed space-elevator look not up at the stars but down at the Earth. Ranging from portraits of childhood to chilling ghost stories, from dystopian visions to poignant evocations of uncanny love, with beautiful prose and melancholy wit, Three Moments of an Explosion is a breath-taking collection of stories that poses searching questions of what it is to be human in an unquiet world. It is a humane and unsentimental investigation of our society, our world, and ourselves.

You can't talk about Mieville without using the word "brilliant" . . . The writing, never less than excellent, takes many tones throughout the 28 stories, some showy, some not. Pastiche, when present, is so skilful that it can go unnoticed. Subjects of real weight are handled with unobtrusive ease but never glibly nor diminished by facetiousness . . . Fascinating, full of suggestion and implication, and beautiful. -- Ursula Le Guin * Guardian *
If anyone doubted whether China Mieville had imagination to burn, proof of his indefatigable creative restlessness is to be found in this collection of short stories . . . This is a bumper collection overflowing with new visions of our beautiful, terrible world. -- Claire Allfree * Metro *
Mieville . . . is gifted with an incomparable visionary imagination. In tale after tale in Three Moments of an Explosion you'll find a conceit so unusual, so disturbing, so arresting, that it takes your breath away. -- James Lovegrove * Financial Times *
A volume that suggests Mieville is not merely looking for techniques to take back to his longer-form fiction, but doing something altogether more ambitious: exploring the unsettling possibilities of short fiction to describe our unsettled lives, rather as JG Ballard did in the last century. * SFX *
Award winner Mieville (Embassytown) moves effortlessly among realism, fantasy, and surrealism . . . His characters, whether ordinary witnesses to extraordinary events or lunatics operating out of inexplicable compulsions, are invariably well drawn and compelling. Above all, what the stories have in common is a sense that the world is not just strange, but stranger than we can ever really comprehend * Publisher's Weekly (Starred Review) *
Horror, noir, fantasy, politics, and poetry swirl into combinations as satisfying intellectually as they are emotionally. Mieville (Railsea, 2012, etc.) has a habit of building his narratives by taking a metaphor, often about a political or social issue, and asking what would happen if it were literally true . . . In less-capable hands, this method might result in mere gags or dead horses endlessly beaten. (Good thing this isn't a Mieville story, or you'd be wiping off bits of rotten horseflesh.) In Mieville's hands it ranges from clever to profound . . . Bradbury meets Borges, with Lovecraft gibbering tumultuously just out of hearing * Kirkus (Starred Review) *
The 28 stories in China Mieville's Three Moments of on Explosion . . . are familiarly strange, full of eloquent monstrosity. A burning stag runs through a city, icebergs float over towns. Mieville's vision has a fragmentary force, and this mosaic text does it proud. * New Scientist *
This collection fizzes with energy and experiment . . . When you put the book down, the world seems a richer, deeper and more frightening place. -- Tim Martin * New Statesman *
[A] fearsomely intelligent collection. * Daily Telegraph *
A collection of short fiction which ranks alongside his best work. That it is an assemblage of various pieces actually plays to Mieville's strengths: the apprehension of social fragmentation and somatic alienation through and endlessly fertile, monstrously inventive imagination. -- Adam Roberts * Guardian *
A gathering of dark nuggets of genius . . . Mieville is one of our most important writers, and this collection demonstrates his versatility and powerful imagination to stunning effect. -- David Barnett * Independent on Sunday *
Mieville - twice winner of the British Fantasy Award and three times winner of the Arthur C Clarke Award - is head and shoulders above other writers in this genre. * The Times *
There is a baroque extravagance to China Mieville's imagination that is uniquely suited to a collection of short fiction . . . The rigour of his sentences, his thinking, his politics and humanity transform these set-ups from the merely eerie to the profoundly unsettling. -- Stuart Kelly * Times Literary Supplement *
A collection of imagined pasts and futures that sparkled with political and narrative insight. * Daily Telegraph *
Mieville - twice winner of the British Fantasy Award and three times winner of the Arthur C Clarke Award - is head and shoulders above other writers in this genre. * The Times Ireland *

China Mieville is a three-time winner of the prestigious Arthur C. Clarke Award and has also won the British Fantasy Award twice. He is the author of many books, including The City & The City, Embassytown and Perdido Street Station. He is also the author of the short story collection Looking for Jake and Other Stories, and the novellas This Census-Taker and The Last Days of New Paris. He lives and works in London.

GOR006907419
Three Moments of an Explosion: Stories by China Mieville
China Mieville
Used - Very Good
Hardback
Pan Macmillan
2015-07-30
448
0230770177
9780230770171
Runner-up for Edge Hill Short Story Prize 2016 (UK)
Book picture is for illustrative purposes only, actual binding, cover or edition may vary.
This is a used book - there is no escaping the fact it has been read by someone else and it will show signs of wear and previous use. Overall we expect it to be in very good condition, but if you are not entirely satisfied please get in touch with us.