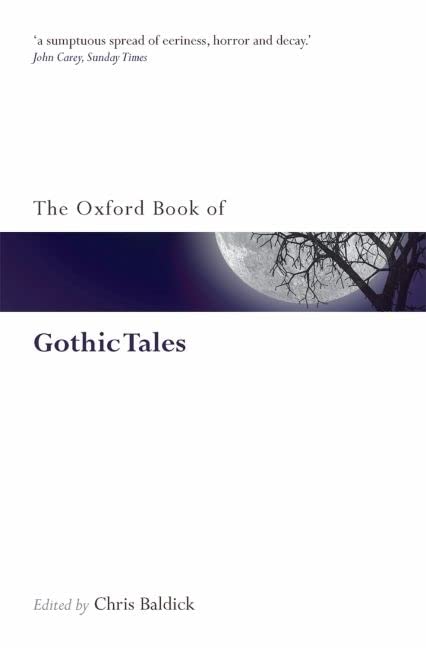 Used Price
$14.39
Free Shipping in the US
A fresh contemporary look for the first anthology to trace the strength and diversity of Gothic fiction from its origins in the eighteenth century, with authors as diverse as Edgar Allan Poe, Thomas Hardy, Jorge Luis Borges, and Angela Carter.
Reviews:
Trustpilot
Very Good

The Gothic tale has been with us for over two hundred years, but this collection is the first to illustrate the continuing strength of this special fictional tradition from its origins in the late eighteenth century. Gothic fiction is generally identified from Horace Walpole's Castle of Otranto and the works of Ann Radcliffe, and with heroes and heroines menaced by feudal villains amid crumbling ruins. While the repertoire of claustrophobic settings, gloomy themes, and threatening atmosphere established the Gothic genre, later writers from Poe onwards achieved an ever greater sophistication, and a shift in emphasis from cruelty to decadence. Modern Gothic is distinguished by its imaginative variety of voice, from the chilling depiction of a disordered mind to the sinister suggestion of vampirism. This anthology brings together the work of writers such as Le Fanu, Hawthorne, Hardy, Faulkner, and Borges with their earliest literary forebears, and emphasizes the central role of women writers from Anna Laetitia Aikin to Isabel Allende and Angela Carter. While the Gothic tale shares some characteristics with the ghost story and tales of horror and fantasy, the present volume triumphantly celebrates the distinctive features that define this powerful and unsettling literary form.

Review from previous edition the perfect book to put beside the bed of a timorous guest you wish would go home * The Economist *
a sumptuous spread of eeriness, horror and decay, plus an astute introduction that lays bare the gothic's vitals...there will be something in this book to chill the blood of any reader. * John Carey, Sunday Times *
Armed with this anthology...the faint-hearted connoisseur can make his way down the gloomy halls and secret passageways of the genre. * Peter Ackroyd, The Times *
this is a generous selection from the eighteenth century up to the present day ... Deliciously unsettling. * The Observer *

I. BEGINNINGS; II. THE NINETEENTH CENTURY; III. THE TWENTIETH CENTURY

GOR001734404
The Oxford Book of Gothic Tales by Chris Baldick (Goldsmiths' College, University of London)
Chris Baldick (Goldsmiths' College, University of London)
Oxford Books of Prose & Verse
Used - Very Good
Paperback
Oxford University Press
2009-03-12
560
0199561532
9780199561537
N/A
Book picture is for illustrative purposes only, actual binding, cover or edition may vary.
This is a used book - there is no escaping the fact it has been read by someone else and it will show signs of wear and previous use. Overall we expect it to be in very good condition, but if you are not entirely satisfied please get in touch with us.