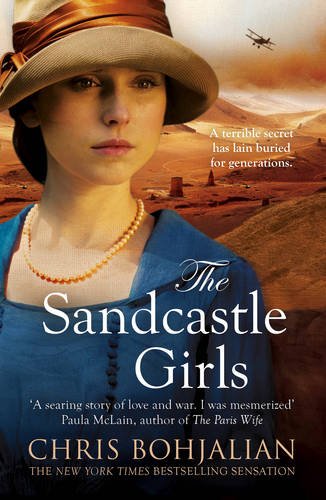 The Sandcastle Girls
by Chris Bohjalian

Used Price
$8.99
Free Shipping in the US
A haunting love story set during the First World War amidst the horrors of the Armenian Genocide
Reviews:
Trustpilot
Very Good

The Sandcastle Girls by Chris Bohjalian

One woman's journey into her family's past reveals a shocking story that has never been told.

1915, Aleppo, Syria.When Elizabeth Endicott steps off the boat from Boston, armed only with a crash course in nursing, nothing could have prepared her for the atrocities she is about to face. For Aleppo is the arrival point for the hundreds of thousands of Armenians who have been forced to march out of Turkey and through the desert to die.

There Elizabeth gets to know Armen, a young Armenian engineer who has already lost his wife and infant daughter in the Genocide. When Armen travels to Egypt to join the British army, he begins to write to Elizabeth, and slowly realizes that, unless he can find his way back to her, he risks becoming lost forever.

Present day, New York.Laura Petrosian has never really given her Armenian heritage much thought until an old friend calls, claiming to have seen a photo of Laura's grandmother advertising a museum exhibition. As Laura embarks on a journey back through her family's history she'll find a tale of love, loss - and the hidden story of a nation in mourning.

Chris Bohjalian is the critically acclaimed author of 11 novels, including Skeletons at the Feast and his most recent New York Times bestseller, The Double Bind, published by Pocket Books. His work has been translated into eighteen languages and published in twenty-one countries. He lives in Vermont with his wife and daughter.

GOR005203604
The Sandcastle Girls by Chris Bohjalian
Chris Bohjalian
Used - Very Good
Paperback
Simon & Schuster Ltd
2013-03-01
416
1471110729
9781471110726
N/A
Book picture is for illustrative purposes only, actual binding, cover or edition may vary.
This is a used book - there is no escaping the fact it has been read by someone else and it will show signs of wear and previous use. Overall we expect it to be in very good condition, but if you are not entirely satisfied please get in touch with us.