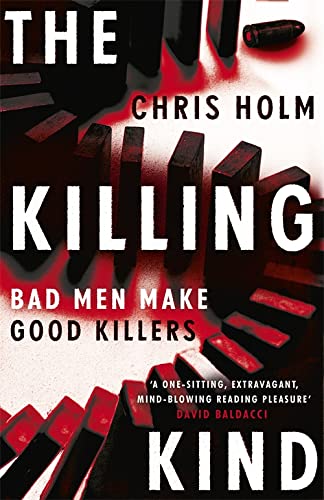 The Killing Kind
by Chris Holm

Used Price
$8.69
Free Shipping in the US
He's a bad man, but a good killer... THE KILLING KIND is an explosive and original thriller for fans of I Am Pilgrim.
Reviews:
Trustpilot
Very Good

The Killing Kind: Winner of the Anthony Award for Best Novel by Chris Holm

Michael Hendricks is not a good man.
He doesn't deserve a good life.
But he is very good at his job.

He doesn't accept contract kills. He doesn't work for any criminal organisation. And he never kills civilians. He only hits hitters.

He's not the kind of guy you call if you want to pop somebody who's pissed you off or done you wrong.

And when he does, you'd be advised to take his call. Because it means that someone wants you dead, and time is running out to save your life.

And now both the FBI and the mafia have Hendricks in their sights, he's about to learn just how good he really is...

A story of rare, compelling brilliance, with a concept so high you'll need oxygen to finish it...This is a one-sitting, extravagant, mind-blowing reading pleasure with a stable of characters who come across as all flesh, bone and folly. You will never look at men hired to kill other humans the same way. You won't merely read this book, you will inhale it. -- David Baldacci
A ripping, twisting yarn you can read in one sitting -- Simon Kernick, author of The Final Minute

Lean, brutal and riveting, THE KILLING KIND is the kind of novel you can't put down but also want to savour. With sharply etched characters, knifelike twists and hardboiled energy to burn, it's an utter winner, beginning to end.

-- Megan Abbott, bestselling author of THE END OF EVERYTHING
Roaring tough-guy fun * The Sunday Times *
Pure joy...so fast-moving, so expertly arranged, every piece fitting together with a well-oiled snap, that it feels weaponized. Read it. Or else. -- Benjamin Percy * New York Times Book Review *

Chris Holm is an award-winning short story writer whose work has appeared in a number of magazines and anthologies, including Ellery Queen's Mystery Magazine, Needle: A Magazine of Noir, and The Best American Mystery Stories 2011. His critically acclaimed trilogy of Collector novels, which blended fantasy with old-fashioned crime pulp, appeared on over forty year's best lists. He lives in Portland, Maine.

GOR006885575
The Killing Kind: Winner of the Anthony Award for Best Novel by Chris Holm
Chris Holm
Used - Very Good
Hardback
Hodder & Stoughton
2015-08-27
320
1473606144
9781473606142
Winner of Anthony Awards: Best Novel 2016
Book picture is for illustrative purposes only, actual binding, cover or edition may vary.
This is a used book - there is no escaping the fact it has been read by someone else and it will show signs of wear and previous use. Overall we expect it to be in very good condition, but if you are not entirely satisfied please get in touch with us.