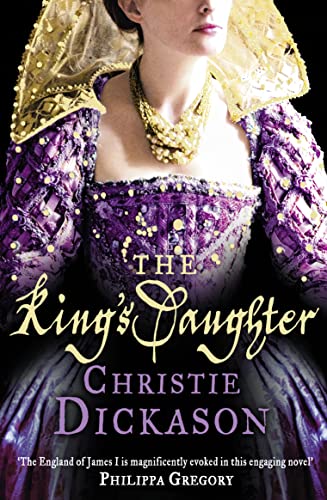 The King's Daughter
by Christie Dickason

Superb historical novel set in the Jacobean court, in which Princess Elizabeth strives to avoid becoming her father's pawn in the royal marriage market.

The King's Daughter by Christie Dickason

Superb historical novel set in the Jacobean court, in which Princess Elizabeth strives to avoid becoming her father's pawn in the royal marriage market.

The daughter of a king - on sale to the highest bidder.

As First Daughter of England, Elizabeth seems to live a life of privilege and luxury. Yet she is imprisoned by duty; a helpless pawn in the political machinations of her father, James I. She trusts only her beloved brother Henry until she is sent a slave-girl, Tallie, who becomes her unlikely advisor. As their friendship grows, the innocent Elizabeth must learn to listen to dangerous truths about her louche father and his volatile court. Can she risk playing their games of secrecy and subterfuge in order to forge her path to love and freedom?

Tragically robbed of Henry in mysterious circumstances, Elizabeth must summon all her resilience and courage to determine her own future. As a stream of suitors are invited to court, her father's unpredictability and the unstable political climate threaten to destroy her one chance for happiness and perhaps even her life.

A heart-breaking tale of romance and rivalry, deceit and devotion, set against a colourful backdrop of dramatic and historical change.

Praise for The Principessa

`This is a fabulous read. I recommend it to anyone who enjoys historical adventure and intrigue, twists and turns but also to those who revel in a poignant and powerful love story. There's something for everyone and what's more, it's beautifully written. What more could anyone ask? I cannot for the life of me understand why Christie Dickason's novels are not better known and appreciated. It's high time.' Historical Novels Review

Praise for The Firemaster's Mistress:

`A rich mix of romance, suspense, adventure and lightly-worn knowledge. Gunpowder, treason and plot have never been so entertaining.' Kate Saunders, The Times

`The Firemaster's Mistress is that rare historical novel: utterly congruent with history and successful as a work of fiction. It tells the story of an engaging man betrayed both by his own honour and his love for a Roman Catholic woman. His skills with explosives lead him into the very heart of the conspiracy, walking a difficult line with plotters, spymasters, and his own fears. The England of James I is magnificently evoked in this engaging novel.' Philippa Gregory

Christie Dickason was born in America but also lived as a child in Thailand, Mexico and Switzerland. Harvard-educated, and a former theatre director and choreographer (with the Royal Shakespeare Company and at Ronnie Scott's among others), she lives in London with her family.

GOR001863634
The King's Daughter by Christie Dickason
Christie Dickason
Used - Very Good
Paperback
HarperCollins Publishers
2010-05-13
496
0007289111
9780007289110
N/A
Book picture is for illustrative purposes only, actual binding, cover or edition may vary.
This is a used book - there is no escaping the fact it has been read by someone else and it will show signs of wear and previous use. Overall we expect it to be in very good condition, but if you are not entirely satisfied please get in touch with us.