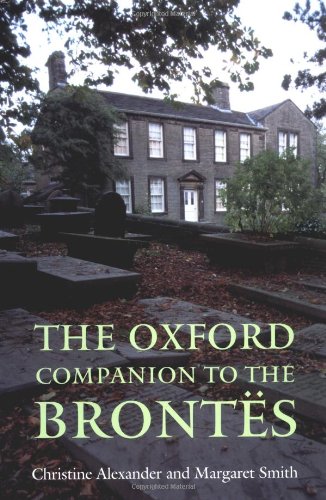 The Oxford Companion to the Brontes
by Christine Alexander

Used Price
$28.99
Free Shipping in the US
This Companion brings together a wealth of information about the perennially fascinating lives and writings of the Bronte sisters. In addition, wide-ranging articles enable the reader to see them in their literary and social context, and to trace their enduring influence on the work of other writers.
Reviews:
Trustpilot
Very Good

The Oxford Companion to the Brontes Summary

The Oxford Companion to the Brontes by Christine Alexander

The Oxford Companion to the Brontes aims to provide both comprehensive and detailed information about the lives, works, and reputations of the Brontes - the three sisters Charlotte, Emily, and Anne, together with their father and their brother Branwell - all of whom were published writers. It is the first time so much information relating to the family has been gathered together in an A-Z reference book. The story of the Brontes has become the stuff of myth: three women living on the wild Yorkshire moors, writing works of weird and wonderful genius. Charlotte Bronte claimed that her sister Emily's novel Wuthering Heights was 'hewn in a wild workshop'. Inspired by a deep love of nature and an intensely private imaginative world it certainly was, but Emily's novel, like those of her sisters, is engaged with 19th-century issues and debates. The Brontes lived in a thriving woollen-mill town and participated in local activities - the church, education, concerts, elections, exhibitions. They devoured the latest newspapers and journals, and kept abreast of politics. Their reading was wide and eclectic. A central purpose of the Companion is to evoke the milieu in which they lived and worked, revealing the complex interrelation between their lives, writings, and times. Long entries surveying the Brontes lives and works are supplemented by entries on friends and acquaintances, pets, literary and political heroes; on the places they knew and the places they imagined; on their letters, drawings and paintings; on historical events such as Chartism, the Peterloo Massacre and the Ashantee Wars; on exploration, slavery, and religion. Selected entries on the characters and places in the Bronte juvenilia provide a glimpse into their early imaginative worlds, and entries on film, ballet, and musicals indicate the extent to which their works have inspired others. This is a unique and authoritative reference book for the research student and the general reader. The A-Z format, extensive cross-referencing, classified contents, chronologies, illustrations, and maps, both facilitate quick reference and encourage further exploration. Entries are also designed to explore scholarly trends and to reflect contemporary directions in literary study. They offer insight into publishing history, bbibliographical studies, collectors and museums, book illustration, and theoretical and critical approaches to the Brontes' writings. This Companion is not only invaluable for quick searches, but a delight to browse, and an inspiration to further reading.

Customer Reviews - The Oxford Companion to the Brontes

The Oxford Companion to the Brontes Reviews

The editors have achieved what they hoped for: to be 'an up-to-date, informative, and wide-ranging reference work' for specialists and general readers alike. Contemporary Review an impressively academic and comprehensive book TLS

Christine Alexander is Professor of English at the University of New South Wales. Her books include the multi-volume Edition of the Early Writings of Charlotte Bronte (1987-91), The Art of the Brontes (1995), and the British-academy prize-winning book The Early Writings of Charlotte Bronte (1982). She has also published widely on gothic literature, Jane Austen, critical editing, literary juvenilia, and landscape gardening. Margaret Smith is Fellow of the Institute of Advanced Research in Arts and Social Sciences, University of Birmingham. She has edited many of the Brontes' works, including The Professor, Jane Eyre, Shirley, Villette, and The Tenant of Wildfell Hall, and the Bronte letters.
"

GOR003475885
The Oxford Companion to the Brontes by Christine Alexander
Christine Alexander
Used - Very Good
Hardback
Oxford University Press
2003-09-25
640
0198662181
9780198662181
N/A
Book picture is for illustrative purposes only, actual binding, cover or edition may vary.
This is a used book - there is no escaping the fact it has been read by someone else and it will show signs of wear and previous use. Overall we expect it to be in very good condition, but if you are not entirely satisfied please get in touch with us.