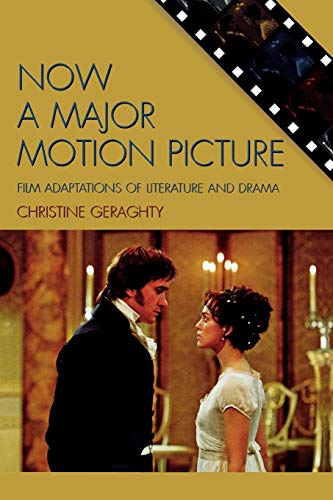 Used Price
$13.99
Free Shipping in the US
A look at the many sources, literary and otherwise, that influence film adaptations. This work subverts the idea that film adaptations of novels and plays must be faithful to the original texts.
Reviews:
Trustpilot
Very Good

Going beyond the process of adaptation, Geraghty is more interested in the films themselves and how they draw on our sense of recall. While a film reflects its literary source, it also invites comparisons to our memories and associations with other versions of the original. For example, a viewer may watch the 2005 big-screen production of Pride and Prejudice and remember Austen's novel as well as the BBC's 1995 television movie. Adaptations also rely on the conventions of genre, editing, acting, and sound to engage our recall-elements that many movie critics tend to forget when focusing solely on faithfulness to the written word.

This wide-ranging, multifaceted, accessible discussion thoughtfully addresses many understudied aspects of screen adaptation. -- Kamilla Elliott, Bowland College, author, Rethinking the Novel/Film Debate
Geraghty covers a wide variety of works...demonstrating the flexibility and broad applicability of her innovative approach to film adaptation....This study provides a fresh perspective on film adaptation....Highly recommended. * CHOICE *
Christine Geraghty's book is...methodologically clear, lucid, and consistent on all levels....At all times Geraghty's discussions remain detailed and nuanced to boot. * Image & Narrative, November 2008 *
Christine Geraghty's book on the adaptation of literature into film comes like a breath of fresh critical air. She knows that the antecedent text can't be ignored, but she places the film in what may well be much more revealing contexts. Geraghty has not only chosen an imposing and unexpected range of literary texts and the films derived from them (from The Last of the Mohicans to Ulysses), but she also views them from new perspectives. Her emphasis is rewardingly on the films themselves and on their contexts: art-house cinema, the half-way house cinema of 'heritage filmmaking,' European independent film, or British New Wave. Adapted films, as Geraghty makes plain, will be read in radically different ways if the viewer has more in mind than a slavish concern for what has been 'done' to the earlier text. This is an important book, scholarly and stimulating and entirely readable. -- Brian McFarlane, Monash University, Australia, and the University of Hull, United Kingdom

Christine Geraghty is Professor of Film and Television Studies at the University of Glasgow, Scotland. She is the author of Women and Soap Opera (1991) and British Cinema in the Fifties (2000).

GOR003977173
Now a Major Motion Picture: Film Adaptations of Literature and Drama by Christine Geraghty
Christine Geraghty
Genre and Beyond: A Film Studies Series
Used - Very Good
Paperback
Rowman & Littlefield
2007-10-02
232
0742538214
9780742538214
N/A
Book picture is for illustrative purposes only, actual binding, cover or edition may vary.
This is a used book - there is no escaping the fact it has been read by someone else and it will show signs of wear and previous use. Overall we expect it to be in very good condition, but if you are not entirely satisfied please get in touch with us.