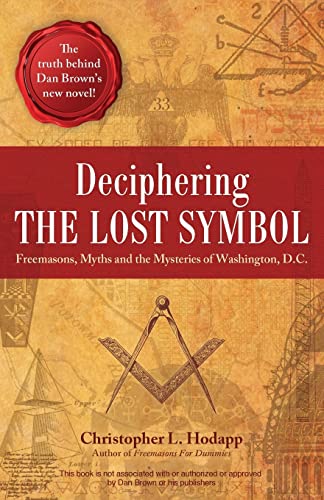 In Stock
$16.99
Deconstructs the various aspects of Dan Brown's novel "The Lost Symbol", including its story elements, places, people and secret codes. This book provides essential background on the Freemasons, including real history, myths, rituals, ceremonies and symbols. It provides the backstory and descriptions of Washington, DC.
Very Good Good
5 in stock

Deciphering the Lost Symbol: Freemasons, Myths and the Mysteries of Washington, D.C. by Christopher Hodapp

DISCOVER THE SECRETIVE BROTHERHOOD BEHIND DAN BROWN'S THE LOST SYMBOL Freemason influence on the founding of Washington, D.C., is evident throughout the city's buildings, statues and monuments--but it's written in coded symbols that few people understand. Dan Brown's new thriller sends symbologist detective Robert Langdon through the capital to unravel its Masonic secrets. Now in Deciphering The Lost Symbol, Freemason expert Christopher L. Hodapp compares each clue and plot twist in Brown's story to the true facts. *Discover the meaning of "The Lost Word" *Decode Masonic and alchemical symbolism *Explore the innermost rooms of Masonic lodges and temples *Visit the restricted area of the U.S. Capitol and other landmarks *Uncover secret patterns in Washington, D.C.'s maps and monuments *Crack the codes buried in The Lost Symbol's artwork and puzzles

Christopher Hodapp is a Freemason and a Past Master of two Masonic lodges. His first book, Freemasons for Dummies, has quickly become the most popular modern guide to the ancient and accepted fraternity of Freemasonry. His second book is the most complete guide to the history of the Freemasons in Washington, DC. He has written for the Indiana Freemason, Masonic Magazine and Templar History Magazine, and he is a monthly columnist for the Texas Home Gardener. Hodapp has spent more than twenty years in advertising as a commercial filmmaker.

GOR005655463
Deciphering the Lost Symbol: Freemasons, Myths and the Mysteries of Washington, D.C. by Christopher Hodapp
Christopher Hodapp
Used - Very Good
Paperback
Ulysses Press
2010-01-13
208
1569757739
9781569757734
N/A
Book picture is for illustrative purposes only, actual binding, cover or edition may vary.
This is a used book - there is no escaping the fact it has been read by someone else and it will show signs of wear and previous use. Overall we expect it to be in very good condition, but if you are not entirely satisfied please get in touch with us.