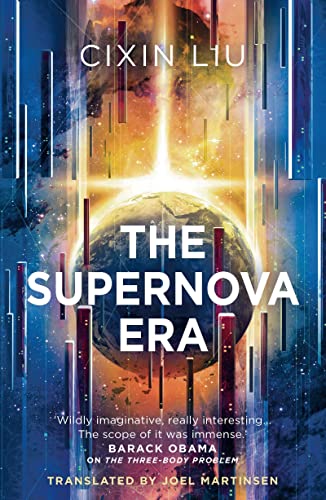 The Supernova Era
by Cixin Liu

When radiation from a supernova kills all the adults, the children become divided: some forge an imitation of the previous society; the others devolve into savagery and violence.

The Supernova Era by Cixin Liu

'Like Ursula K. Le Guin rewriting The Lord of the Flies for the quantum age' NPR. 'Cixin Liu is the author of your next favourite sci-fi novel' WIRED.

Eight years ago and eight light years away, a supermassive star died.

Tonight, a supernova tsunami of high energy will finally reach Earth. Dark skies will shine bright as a new star blooms in the heavens and within a year everyone over the age of thirteen will be dead, their chromosomes irreversibly damaged.

And so the countdown begins.

Parents apprentice their children and try to pass on the knowledge they'll need to keep the world running.

But the last generation may not want to carry the legacy of their parents' world. And though they imagine a better, brighter future, they may not be able to escape humanity's dark instincts...

'Wildly imaginative, really interesting ... The scope of it was immense' BARACK OBAMA.

'Enthralling ... This novel has the same studiously well-thought-out plot and situation, the same attention to detail and a similar holistic outlook as the 'Three Body' books ... Their personal journeys against the backdrop of huge social revolutions are touching and endlessly intriguing' SFcrowsnest.
'A masterful opening sequence ... Liu is superb at creating drama from technical description' Guardian.
'So absorbing ... Liu is particularly good at evoking the short-term loss, loneliness and panic ... He thin-slices the start of Supernova Era into tense minutes ... An extraordinary novel ... Continually thrilling, engaging and thought-provoking' South China Morning Post.

Cixin Liu is China's #1 SF writer and author of The Three-Body Problem - the first ever translated novel to win a Hugo Award. Prior to becoming a writer, Liu worked as an engineer in a power plant in Yangquan.

Joel Martinsen is the translator of The Dark Forest by Cixin Liu and (with Alice Xin Liu) of The Problem With Me, a collection of essays by Han Han. His translations of short fiction have appeared in Pathlight, Chutzpah, and Words Without Borders. He lives in Beijing.

CIN000404134
The Supernova Era by Cixin Liu
Cixin Liu
Used - Very Good
Paperback
Head of Zeus
2020-04-02
448
1788542401
9781788542401
N/A
Book picture is for illustrative purposes only, actual binding, cover or edition may vary.
This is a used book - there is no escaping the fact it has been read by someone else and it will show signs of wear and previous use. Overall we expect it to be in very good condition, but if you are not entirely satisfied please get in touch with us.