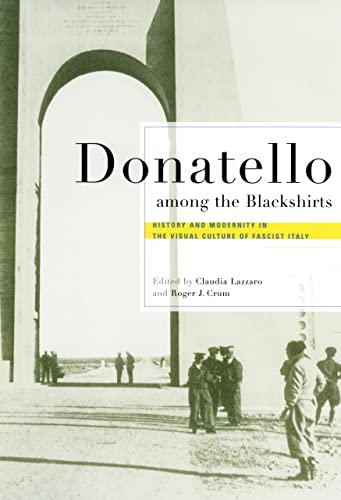 Donatello among the Blackshirts
by Claudia Lazzaro

This ambitious collection treating the Italian Fascists' appropriation of the past for political purposes focuses on the role of the visual in the aim of fusing the past and the modern world in Mussolini's Italy. With contributions by art historians...

Donatello among the Blackshirts Summary

Donatello among the Blackshirts: History and Modernity in the Visual Culture of Fascist Italy by Claudia Lazzaro

This ambitious collection treating the Italian Fascists' appropriation of the past for political purposes focuses on the role of the visual in the aim of fusing the past and the modern world in Mussolini's Italy. With contributions by art historians and classicists, literary and intellectual historians, Donatello among the Blackshirts demonstrates that the Fascist regime appropriated not only Italy's ancient Roman past but also the medieval, Renaissance, and even baroque eras, as well as its own recent history, in constructing a new myth of the nation.

Every aspect of visual culture-from monumental architecture, sculpture, painting, and gardens to exhibitions, spectacles, films, medals, household items, and stamps-helped to link the past with modernity. As a result, Italy's artistic traditions became familiar to all social classes throughout the peninsula. While this richly illustrated book concerns Fascist Italy, at the same time it also shows how Italy's premodern artistic traditions have been passed down to the present through the filter of the Fascist era.

Customer Reviews - Donatello among the Blackshirts

Donatello among the Blackshirts Reviews

"This highly stimulating, coherent, and original volume of essays illuminates superbly the many and complex ways in which the Fascist regime appropriated different aspects of the past, from ancient Rome to the Risorgimento, in its attempts to manufacture and promote an integrated and intrinsically modern national identity for Italy."-Christopher Duggan, author of Fascism and the Mafia and A Concise History of Italy
"The interdisciplinary essays of Donatello among the Blackshirts provide readers with a rich, informative, and highly accessible overview of the manipulation of history, culture, and the arts in Fascist Italy."-Lucia Re, University of California, Los Angeles
"A refreshing view of Fascist Italy from the perspective of scholars of antiquity and the Renaissance, Donatello among the Blackshirts illuminates long-neglected components of Fascist culture and reminds us of the lasting effects of Fascist-era interventions in and manipulations of Italy's rich cultural patrimony."-Ruth Ben-Ghiat, author of Fascist Modernities: Italy, 1922-1945
"This book deals with the exercise of power through display and the intentional manipulation by Fascist Italy of cultural forms and practices in order to project a dominant visual culture. Providing specific examples and noting the complexity of the process, the authors deal with evidence and wrestle with the complexity of actual events, people, and contingencies."-Dennis Doordan, University of Notre Dame

Claudia Lazzaro is Professor in the Department of History of Art, Cornell University. She is the author of The Italian Renaissance Garden: From the Conventions of Planting, Design, and Ornament to the Grand Gardens of Sixteenth-Century Central Italy. Roger J. Crum is Associate Professor of Art History and Graul Chair in Arts and Languages at the University of Dayton. He is coeditor with John T. Paoletti of the forthcoming Florence: The Dynamics of Space in the Renaissance City.

GOR007089674
Donatello among the Blackshirts: History and Modernity in the Visual Culture of Fascist Italy by Claudia Lazzaro
Claudia Lazzaro
Used - Very Good
Paperback
Cornell University Press
2004-12-23
304
0801489210
9780801489211
N/A
Book picture is for illustrative purposes only, actual binding, cover or edition may vary.
This is a used book - there is no escaping the fact it has been read by someone else and it will show signs of wear and previous use. Overall we expect it to be in very good condition, but if you are not entirely satisfied please get in touch with us.