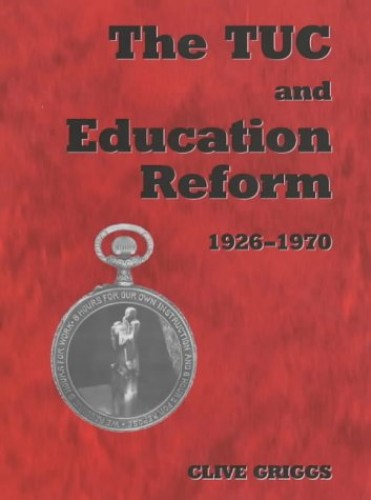 Used Price
$18.49
Free Shipping in the US
Unlike many European nations the British TUC was never divided on religious or political issues. In this comprehensive survey Clive Griggs explores the links between the TUC and the process of education reform in Britain from 1926 to 1970.
Reviews:
Trustpilot
Very Good

This book covers a crucial period for the development of state education in Britain; the advent of the comprehensive debate before and during the Second World War; the War years themselves and the 1944 Education Act; the post-War Labour Government; and Churchill's last government in a time of education expansion. From the 1960s, the focus shifted to questions of social deprivation and educational opportunities, secondary school selection, the debate on standards, Robbins and higher education, and the continuing theme of the dominance of public schools.

The book is divided into four sections, which are then divided into chapters. Each chapter takes as its main reference point a key issue within the chronological framework of the book, e.g. resistance to secondary education for all, politics and textbooks, multilateral and technical schools, pressure groups and the 1944 Education Act, Churchill and the Conservatives. Much new light is thrown on the topics by the author's use of new material and he has made a valuable contribution to the politics of education.

'It is a heart-warming record of a long march through the committees but reads like an adventure story.' - Adults Learning

'This book is an impressive piece of scholarship ... a formidable addition to the literature, one which will be sought after and should be on the shelves of any serious commentator on educational politics in Britain during the twentieth century and Clive Griggs is to be congratulated on it.' - Educational Review

Part 1 The inter-war years 1926-1939: putting secondary education on the agenda; resistance to secondary education for all; multilateral and technical schools; school welfare and nursery school provision; politics and textbooks. Part 2 The war years 1939-1945: outbreak of war and evacuation; post-war planning; Norwood and reconstruction; pressure groups and the 1944 Education Act; the public schools - a case of special treatment?. Part 3 The immediate post-war years 1945-1959: Labour governments and the implementation of the 1944 Education Act; the Conservatives back in power, 1951 - contraction and expansion; nursery education and school welfare; the 1944 Education Act - unfinished business. Part 4 A time of hope 1960-1970: social deprivation - education to the rescue?; secondary education - academic and social selection; higher education; the public schools - still a force to be reckoned with; conclusion; appendices.

GOR007083829
The TUC and Education Reform, 1926-1970 by Clive Griggs
Clive Griggs
Woburn Education Series
Used - Very Good
Hardback
Taylor & Francis Ltd
2002-09-19
320
0713002360
9780713002362
N/A
Book picture is for illustrative purposes only, actual binding, cover or edition may vary.
This is a used book - there is no escaping the fact it has been read by someone else and it will show signs of wear and previous use. Overall we expect it to be in very good condition, but if you are not entirely satisfied please get in touch with us.