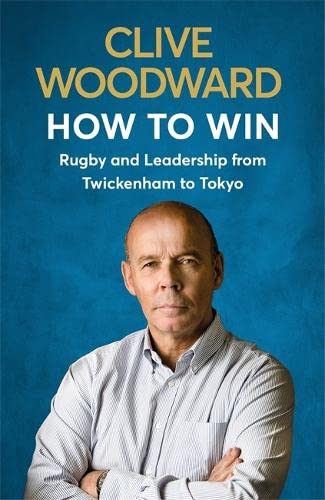 How to Win
by Clive Woodward

Used Price
$13.99
Free Shipping in the US
How to Win is Clive Woodward's collected philosophy and principles of leadership learned during a lifetime in elite environments
Reviews:
Trustpilot
Very Good Good

How to Win Summary

How to Win by Clive Woodward

In his entertaining and informative new book, Sir Clive Woodward analyses the events of the 2019 Rugby World Cup, offering his unique perspective on the performance of players and coaches, from Owen Farrell and Kieran Read, to Eddie Jones and Steve Hansen.

HOW TO WIN:Rugby and Leadership from Twickenham to Tokyo is much more than the story of a tournament, however. It is the distillation of a philosophy of leadership developed during a lifetime in high-performance environments, from the rugby field to the boardroom. Tapping into his experience of winning the 2003 World Cup, being a part of the leadership team that delivered Olympic Success in 2012 and lessons drawn from Japan 2019, the author delivers a go-to manual in how to improve both individual and team performance in order to reach the pinnacle in sport and in business.

Every individual position in rugby requires a unique set of skills, knowledge and expertise that collectively form a balanced team; the same is true in any successful business or organisation. From 1 to 15, the former England and British and Irish Lions coach identifies the key attributes and uses these defining traits to explain his collaborative 'Teamship' leadership style.

With a fascinating blend of analysis, insight and anecdote, and the highs and lows of a memorable Rugby World Cup as the setting, Clive reveals how to lead the culture of a winning team - in any context.

Customer Reviews - How to Win

Clive Woodward was born in 1954. He was educated at HMS Conway in Anglesey and Loughborough University. He played rugby for Leicester, England and the Lions, and Manley in Australia. During his impressive business career Clive Woodward successfully coached Henley RFC, London Irish and Bath before being appointed the first National England coach. He memorably led the England rugby team to World Cup victory in 2003. He lives in Berkshire with his wife and three children.

GOR010192892
How to Win by Clive Woodward
Clive Woodward
Used - Very Good
Hardback
Hodder & Stoughton
2019-11-28
352
1529339383
9781529339383
N/A
Book picture is for illustrative purposes only, actual binding, cover or edition may vary.
This is a used book - there is no escaping the fact it has been read by someone else and it will show signs of wear and previous use. Overall we expect it to be in very good condition, but if you are not entirely satisfied please get in touch with us.