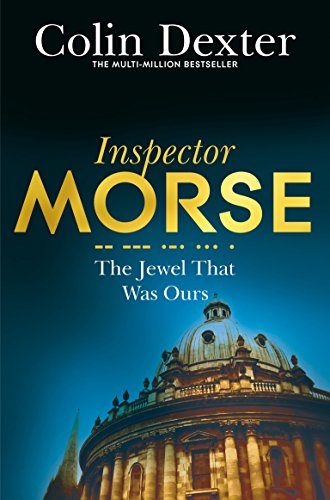 The Jewel That Was Ours
by Colin Dexter

The Jewel That Was Ours Summary

The Jewel That Was Ours by Colin Dexter

The Jewel That Was Ours is the ninth novel in Colin Dexter's Oxford-set detective series.

He looked overweight around the midriff, though nowhere else, and she wondered whether perhaps he drank too much. He looked weary, as if he had been up most of the night conducting his investigations . . .

For Oxford, the arrival of twenty-seven American tourists is nothing out of the ordinary . . . until one of their number is found dead in Room 310 at the Randolph Hotel.

It looks like a sudden - and tragic - accident. Only Chief Inspector Morse appears not to overlook the simultaneous theft of a jewel-encrusted antique from the victim's handbag . . .

Then, two days later, a naked and battered corpse is dragged from the River Cherwell. A coincidence? Maybe. But this time Morse is determined to prove the link . . .

The Jewel That Was Ours is followed by the tenth Inspector Morse book, The Way Through the Woods.

Customer Reviews - The Jewel That Was Ours

Colin Dexter has won many awards for his novels including the CWA Gold Dagger and Silver Dagger awards. In 1997 he was presented with the CWA Cartier Diamond Dagger Award for outstanding services to crime literature. Colin's thirteenth and final Inspector Morse novel, The Remorseful Day, was published in 1999. He died in 2017 at his home in Oxford.

GOR008426766
The Jewel That Was Ours by Colin Dexter
Colin Dexter
Inspector Morse Mysteries
Used - Very Good
Paperback
Pan Macmillan
2016-01-04
368
1447299248
9781447299240
N/A
Book picture is for illustrative purposes only, actual binding, cover or edition may vary.
This is a used book - there is no escaping the fact it has been read by someone else and it will show signs of wear and previous use. Overall we expect it to be in very good condition, but if you are not entirely satisfied please get in touch with us.