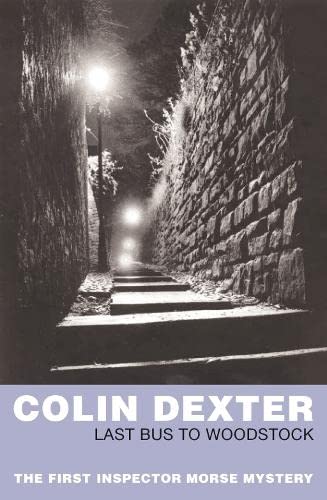 'Do you think I'm wasting your time, Lewis?'

Lewis was nobody's fool and was a man of some honesty and integrity.

An engaging smile crept across Morse's mouth. He thought they could get on well together . . .'

The death of Sylvia Kaye figured dramatically in Thursday afternoon's edition of the Oxford Mail.

By Friday evening Inspector Morse had informed the nation that the police were looking for a dangerous man - facing charges of wilful murder, sexual assault and rape.

But as the obvious leads fade into twilight and darkness, Morse becomes more and more convinced that passion holds the key . . .

GOR001228568
Last Bus to Woodstock by Colin Dexter
Colin Dexter
Inspector Morse Mysteries
Used - Very Good
Paperback
Pan Macmillan
2007-03-16
320
0330451189
9780330451185
N/A
Book picture is for illustrative purposes only, actual binding, cover or edition may vary.
This is a used book - there is no escaping the fact it has been read by someone else and it will show signs of wear and previous use. Overall we expect it to be in very good condition, but if you are not entirely satisfied please get in touch with us.