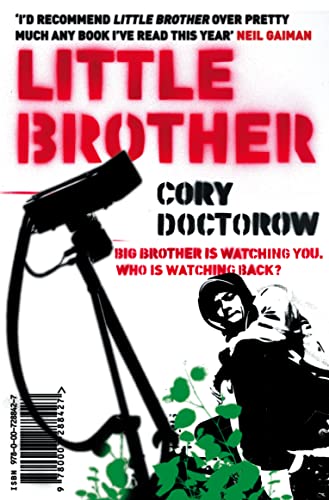 The ultimate tale of teen rebellion - one seventeen-year-old against the surveillance state.

The ultimate tale of teen rebellion - one seventeen-year-old against the surveillance state.

Big Brother is watching you. Who's watching back?

Marcus is only seventeen years old, but he figures he already knows how the system works - and how to work the system. Smart, fast and wise to the ways of the networked world, he has no trouble outwitting his high school's intrusive but clumsy surveillance systems.

But his whole world changes when he and his friends find themselves caught in the aftermath of a major terrorist attack on San Francisco. In the wrong place at the wrong time, Marcus and his crew are apprehended by the Department of Homeland Security and whisked away to a secret prison, where they're mercilessly interrogated for days.

When the DHS finally releases them, Marcus discovers that his city has become a police state, where every citizen is treated like a potential terrorist. He knows no one will believe his story, which leaves him only one option: to take down the DHS himself.

`I'd recommend `Little Brother' over pretty much any book I've read this year. Because I think it'll change lives. It's a wonderful, important book' Neil Gaiman

`A well structured and superbly executed thriller with breakneck pacing and an emotional payoff to boot. Engaging, thought provoking, and at times harrowing.SciFi Now

`A compulsive and chillingly credible read ... would make a great discussion for any reading group' New Books

`A tale of struggle familiar to any teenager, about those moments when you choose what your life is going to mean.' Steven Gould, author of `Jumper'

`A timely and at times frightening read that is sure to resonate with a generation of computer-savvy teens, but also with those who have never heard of an arphid or re-built a hard drive' Sun Herald (Australia)

`Doctorow's ambitious set-up spawns a fast-paced tale of triumph ...rife with snappy dialogue and breathtaking scope ... an exceptional, eye-opening novel that everyone should read' Canberra Times

Cory Doctorow is co-editor of BoingBoing.net and the former European director of the Electronic Frontier Foundation. He writes columns for Make, Information Week, the Guardian online and Locus. He has won the Locus Award for his fiction three times, been nominated for the Hugo and the Nebula, won the Campbell Award and was named one of the internet's top 25 influencers by Forbes magazine and a Young Global Leader by the World Economic Forum. He hopes you'll use technology to change the world.

GOR001223322
Little Brother by Cory Doctorow
Cory Doctorow
Used - Very Good
Paperback
HarperCollins Publishers
2008-10-13
384
0007288425
9780007288427
N/A
Book picture is for illustrative purposes only, actual binding, cover or edition may vary.
This is a used book - there is no escaping the fact it has been read by someone else and it will show signs of wear and previous use. Overall we expect it to be in very good condition, but if you are not entirely satisfied please get in touch with us.