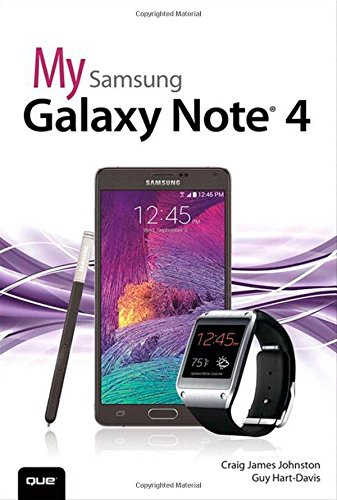 Full-color, step-by-step tasks walk you through getting and keeping your Samsung Galaxy Note 3 working just the way you want.

My Samsung Galaxy Note 4 helps you quickly get started with your Note 4 and use its features to perform day-to-day activities from anywhere, any time.

Full-color, step-by-step tasks walk you through getting and keeping your Samsung Galaxy Note 4 working just the way you want. Learn how to

Step-by-step instructions with callouts to Samsung Galaxy Note 4 images that show you exactly what to do
Help when you run into Samsung Galaxy Note 4 problems or limitations
Tips and Notes to help you get the most from your Samsung Galaxy Note 4
Craig James Johnston has been involved with technology since his high school days at Glenwood High in Durban, South Africa, when his school was given some Apple ][ Europluses. From that moment, technology captivated him, and he has owned, supported, evangelized, and written about it.

Craig has been involved in designing and supporting large-scale enterprise networks with integrated email and directory services since 1989. He has held many different IT-related positions in his career, ranging from sales support engineer to mobile architect for a 40,000-smartphone infrastructure at a large bank.

In addition to designing and supporting mobile computing environments, Craig cohosts the CrackBerry.com podcast as well as guest hosting on other podcasts, including iPhone and iPad Live podcasts. You can see Craig's previously published work in his books Professional BlackBerry, My iMovie, and many books in the My series covering devices by BlackBerry, Palm, HTC, Motorola, Samsung, and Google.

Craig also enjoys high-horsepower, high-speed vehicles and tries very hard to keep to the speed limit while driving them.

Originally from Durban, South Africa, Craig has lived in the United Kingdom, the San Francisco Bay Area, and New Jersey, where he now lives with his wife, Karen, and a couple of cats.

Craig would love to hear from you. Feel free to contact Craig about your experiences with My Samsung Galaxy Note 4 at http://www.CraigsBooks.info. All comments, suggestions, and feedback are welcome, including positive and negative.

GOR010923096
9780789754509
0789754509
My Samsung Galaxy Note 4 by Craig James Johnston
Craig James Johnston
Used - Like New
Paperback
Pearson Education (US)
2015-04-01
496
N/A
Book picture is for illustrative purposes only, actual binding, cover or edition may vary.
The book has been read, but looks new. The book cover has no visible wear, and the dust jacket is included if applicable. No missing or damaged pages, no tears, possible very minimal creasing, no underlining or highlighting of text, and no writing in the margins
Trustpilot