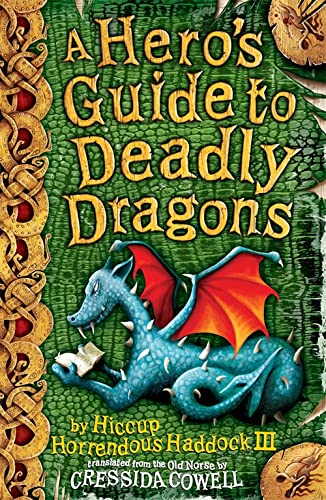 A Hero's Guide to Deadly Dragons
by Cressida Cowell

In Stock
$10.39
Delve into this special volume of Hiccups memoirs to find a brand new exciting adventure, a detailed map of the Archipelago and lots more dragon profiles! Also contains a comprehensive Dragonese Dictionary for those who'd like to dragon-whisper as well as the dragon-whisperer himself
Like New Very Good
Only 3 left

A Hero's Guide to Deadly Dragons: Book 6 by Cressida Cowell

Read the original books before you see the How to Train Your Dragon film!

THE STORY CONTINUES in the sixth volume of Hiccup's How to Train Your Dragon memoirs...

Hiccup Horrendous Haddock III was an awesome sword-fighter, a dragon-whisperer and the greatest Viking Hero who ever lived. But it wasn't always like that. Hiccup's memoirs look back to when Hiccup was just an ordinary boy, and finding it very hard to be a Hero.

Hiccup is lost in the Library Labyrinth and the Driller-Dragons and Madguts and Murderous are on the prowl. Hiccup's birthday is not going to be the quiet affair he might have hoped for. Also contains a comprehensive Dragonese Dictionary for those who'd like to dragon-whisper as well as the dragon-whisperer himself.

Read the rest of Hiccup's exploits in the How to Train Your Dragon series in How to Be a Pirate, How to Speak Dragonese, How to Cheat a Dragon's Curse, How to Twist a Dragon's Tale, A Hero's Guide to Deadly Dragons, How to Ride a Dragon's Storm, and How to Break a Dragon's Heart.

Check out the all-new Hiccup website at www.howtotrainyourdragonbooks.com It's the place to go for games, downloads, activities and sneak peeks! Read all about Hiccup and all of your favourite characters, learn to speak Dragonese and train your own dragon to do tricks!

Cressida Cowell grew up mostly in Central London. She has a BA in English Literature from Oxford University, a BA in Graphic Design from St Martin`s and an MA in Narrative Illustration from Brighton. She lives in Hammersmith, London with her husband, three children and a hamster Mini.

GOR010456317
A Hero's Guide to Deadly Dragons: Book 6 by Cressida Cowell
Cressida Cowell
How To Train Your Dragon
Used - Like New
Paperback
Hachette Children's Group
2008-06-05
256
0340950374
9780340950371
N/A
Book picture is for illustrative purposes only, actual binding, cover or edition may vary.
This is a used book - there is no escaping the fact it has been read by someone else and it will show signs of wear and previous use. Overall we expect it to be in very good condition, but if you are not entirely satisfied please get in touch with us.