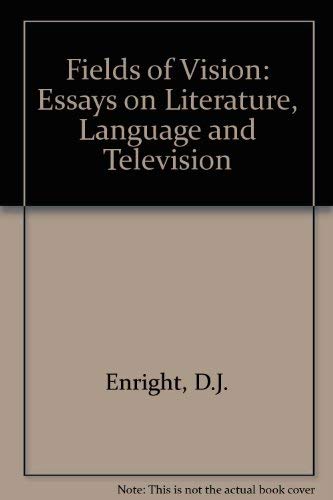 Used Price
$15.49
Free Shipping in the US
A survey of television, from adaptations of classics through soap operas to commercials, examining its influence on our attitudes and actions. Enright contrasts literature and language with the screen's meagre involvement of the imagination, looking at writers such as Grass, Kraus and Singer.
Reviews:
Trustpilot
Very Good

Fields of Vision: Essays on Literature, Language and Television by D. J. Enright

These essays begin with a survey of television from adaptations of the classics through soap operas to chat shows and commercials. The author examines the notion of "realism" in the arts, the self-referring tendencies of television and its role in the AIDS debate. He discusses the question of television's influence on our attitudes and actions. The author looks at the disappearance of the word "evil" and the persistence in popular entertainment of the Dracula and Frankenstein myths. He contrasts television's meagre involvement of the imagination with books which do not lend themselves to other media. He considers writers such as Grass, Kraus, Singer, Milosz and Robertson Davies who, he argues, are not afraid of employing fantasy in their exploration of reality. The last section of the book deals with language, its usage and potency. D.J. Enright is a poet, critic and author of "The Alluring Problem". Some of the central sections of this book on literature and language are revised versions of reviews written for "NY Review of Books" and other journals.

About the Author
D.J. Enright is editor of The Oxford Book of Death and Fair of Speech: The Uses of Euphemism and author of The Alluring Problem: An Essay on Irony. His most recent book of poetry is Collected Poems 1987.

Part 1 Television: books on the box; pity and terror and the bottom line; mice in cages; the serious stuff; teaching and talking; stirring things up; chambers of commerce; copulation explosion; mighty were the auxiliars; causes without effects; the masters; for the children; building bridges. Part 2 Literature: intermission; perilous sword-dance; evils be ye my good; what happened to the Devil; the third place; hell's angels; a doomsday book; master of horror; the executioner himself; is God an endless orgasm; signs and wonders; more than mere biology; "a bad man, my dears" - Heine in English; "my muse, mnemosyne". Part 3 Language: vulgar tongues; words deft and daft; truth, beauty and bafflegab; the house of Joss; death of a thousand typewriters; broad rumour.

GOR003564628
Fields of Vision: Essays on Literature, Language and Television by D. J. Enright
D. J. Enright
Used - Very Good
Hardback
Oxford University Press
1989-03-31
264
019212269X
9780192122698
N/A
Book picture is for illustrative purposes only, actual binding, cover or edition may vary.
This is a used book - there is no escaping the fact it has been read by someone else and it will show signs of wear and previous use. Overall we expect it to be in very good condition, but if you are not entirely satisfied please get in touch with us.