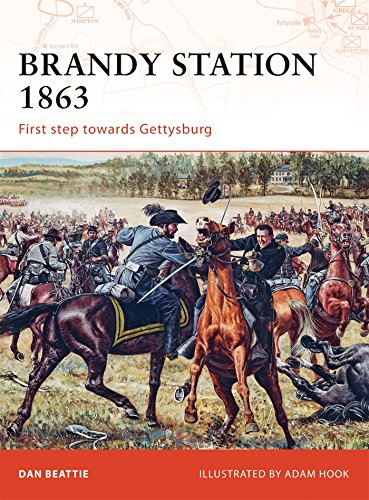 The road to Gettysburg began at Brandy Station on June 9, 1863 during the American Civil War (1861-1865). However, the cavalry clash in Culpeper County, Virginia, counts for more than just the opening round of Lee's second invasion of the North. The battle showed both sides that the Federal cavalry had now come of age, that Blue and Gray horsemen were now equal in ability. Early in the morning on June 9, Pleasanton launched his men, split into two divisions, across the Rappahannock at Beverley's Ford to the north of Brandy Station and Kelly's Ford to the south. Stuart was caught completely unaware by these maneuvers and his lines and headquarters were nearly overrun until reinforcements helped to stabilize the situation. Following 12 hours of bitter fighting the Union forces withdrew back across the river, having matched the Confederate cavalry in skill and determination for the first time in the War between the States in what was the largest and most hotly contested clash of sabers in this long and bloody war.

This book describes the battle with a step-by-step analysis of the proceedings, illustrated with detailed maps, birds-eye-views and full color battlescene artwork.

"In short, this book is an excellent overview of the initial battle of the Gettysburg Campaign." --Jeff Grim, Collected Miscellany, www.collectedmiscellany.com (February 2009)

Daniel Beattie is a former librarian, New York City welfare investigator, infantryman, Public Information Officer for the USDA Forest Service, professor of History and Political Science, and businessman. He earned a BA from the City University of New York, and a MA and PhD in History from Duke University. For many years he served on the Boards of Trustees of the Association for the Preservation of Civil War Sites and the Civil War Preservation Trust, and has received the highest Preservationist Award of both groups. He sat on the Board of the Brandy Station Foundation for about 10 years. He has been instrumental in saving each of the preserved parcels of land of Brandy Station battlefield. The author lives in Charlottesville, Virginia.

GOR001889317
Brandy Station 1863: First Step Towards Gettysburg by Dan Beattie
Dan Beattie
Used - Very Good
Paperback
Bloomsbury Publishing PLC
2008-10-02
96
1846033047
9781846033049
N/A
Book picture is for illustrative purposes only, actual binding, cover or edition may vary.
This is a used book - there is no escaping the fact it has been read by someone else and it will show signs of wear and previous use. Overall we expect it to be in very good condition, but if you are not entirely satisfied please get in touch with us.