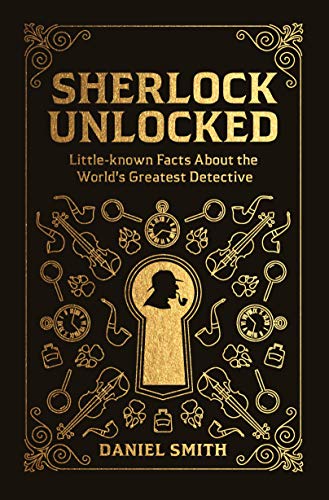 In Stock
$7.99
In Sherlock Unlocked, Daniel Smith looks behind what we think we know about the well-known sleuth and reveals fascinating little-known facts of which every Sherlock aficionado should be aware.
Very Good
Only 1 left

Daniel Smith looks behind what we think we know about the well-known sleuth and reveals little-known facts of which every Sherlock aficionado should be aware.

Consulting detective Sherlock Holmes has been fascinating generations of readers, watchers and listeners for over 130 years, since he first appeared in print in 1887. Now an internationally renowned cultural icon, his name appears on books, films, television dramas, radio plays, stage adaptations and the rest right across the world and he is listed in the Guinness Book of World Records as `the most portrayed movie character' in history.

With all this material readily available, one might think there's not much to find out about Sherlock, but in Sherlock Unlocked, Daniel Smith looks behind what we think we know about the well-known sleuth and reveals little-known facts of which every Sherlock aficionado should be aware. From the eccentric and odd characters to the bizarre plot twists, and from Conan Doyle to Moriarty, this book will appeal to Holmes' fans old and new.

Full of fascinating facts, such as:

- The shameful addiction of Watson's that Holmes kept secret - a dark gambling habit.
- The part the legendary Langham Hotel played, in both Conan Doyle's literary friendships - including with Oscar Wilde - and in the storylines he created for Holmes and Watson.
- The Real Moriarty? The true-life London underworld thief-taker, Jonathan Wild, was a model for Professor Moriarty
- Holmes's retirement passion was bee-keeping.
- One of Conan Doyle's childhood teachers, Eugene Chantrelle, became a notorious murderer.

Daniel Smith is a non-fiction author and editor who has written across a range of subjects, including politics, economics and social history. He is the author of The Ardlamont Mystery: The Real-Life Story Behind the Creation of Sherlock Holmes, and the 'How to Think Like ...' series for Michael O'Mara Books, which has been published in 20 languages and sold over 413,000 copies worldwide. He is also a long-time contributor to The Statesman's Yearbook, the geo-political guide to the world that celebrated its 150th anniversary in 2013. He lives in London with his wife and two children.

GOR009813765
Sherlock Unlocked: Little-known Facts About the World's Greatest Detective by Daniel Smith
Daniel Smith
Used - Very Good
Hardback
Michael O'Mara Books Ltd
2019-05-02
192
1789290694
9781789290691
N/A
Book picture is for illustrative purposes only, actual binding, cover or edition may vary.
This is a used book - there is no escaping the fact it has been read by someone else and it will show signs of wear and previous use. Overall we expect it to be in very good condition, but if you are not entirely satisfied please get in touch with us.