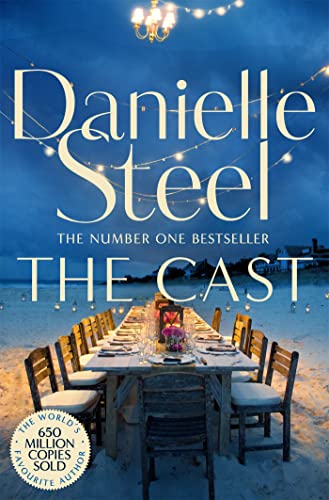 The Cast
by Danielle Steel

Used Price
$6.99
Free Shipping in the US
Inspirational and uplifting, The Cast is a celebration of the resilience, imagination and creativity of women.
Very Good Good

The Cast by Danielle Steel

The Cast is an irresistible celebration of the strength of women, finding the courage to persevere through the drama of heartbreak and joy, by the world's favourite storyteller, Danielle Steel.

Kait Whittier has built her magazine column into a hugely respected read followed by fans across the country. She loves her work and adores her grown children, treasuring the time they spend together. But after two marriages, she prefers to avoid the complications and uncertainties of a new love.

Then, after a chance meeting with television producer Zack Winter, everything changes. Inspired by the true story of her own grandmother, Kait creates the storyline for a TV series. Within weeks, Kait is plunged into a colourful, star-studded world of actors and industry pros who will bring her vision to life, from the reclusive grand dame to LA's hottest bad boy actor.

As secrets are shared and revelations come to light, friendships deepen. But in the midst of this charmed year, Kait is forced to confront the greatest challenge a mother could ever know and this unforgettable cast becomes more important to her than she ever could have imagined.

Danielle Steel has been hailed as one of the world's most popular authors, with nearly a billion copies of her novels sold. Her international bestsellers include Fall from Grace, Accidental Heroes and The Cast. She is also the author of His Bright Light, the story of her son Nick Traina's life and death; A Gift of Hope, a memoir of her work with the homeless; and the children's books Pretty Minnie in Paris and Pretty Minnie in Hollywood. Danielle divides her time between Paris and her home in northern California.

GOR009707360
The Cast by Danielle Steel
Danielle Steel
Used - Very Good
Paperback
Pan Macmillan
2019-03-21
336
1509800522
9781509800520
N/A
Book picture is for illustrative purposes only, actual binding, cover or edition may vary.
This is a used book - there is no escaping the fact it has been read by someone else and it will show signs of wear and previous use. Overall we expect it to be in very good condition, but if you are not entirely satisfied please get in touch with us.