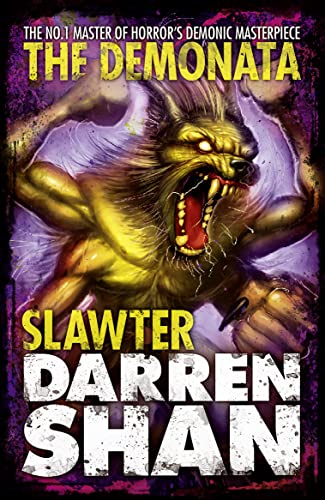 "Never trust fairy tales. There are no happy endings. There's always something new around the corner. You can overcome major obstacles, face great danger, look evil in the eye and live to tell the tale - but that's not the end. As long as you're breathing, your story's still going..."

Nightmares haunt the dreams of Dervish Grady since his return from the Demonata universe, but Grubbs takes care of his uncle as they both try to continue a normal, demon-free existence. When a legendary cult director calls in Dervish as consultant for a new horror movie, it seems a perfect excuse for a break from routine and a chance for some fun.

But being on the set of a town called Slawter stirs up more than memories for Grubbs and his friend Bill-E.

"Horror is the hottest genre in children's fiction and Darren Shan's gruesome stories sell by the millions" James Delingpole, The Sunday Telegraph

GOR001229656
Slawter (The Demonata, Book 3) by Darren Shan
Darren Shan
The Demonata
Used - Very Good
Paperback
HarperCollins Publishers
2007-01-03
272
0007231385
9780007231386
N/A
Book picture is for illustrative purposes only, actual binding, cover or edition may vary.
This is a used book - there is no escaping the fact it has been read by someone else and it will show signs of wear and previous use. Overall we expect it to be in very good condition, but if you are not entirely satisfied please get in touch with us.