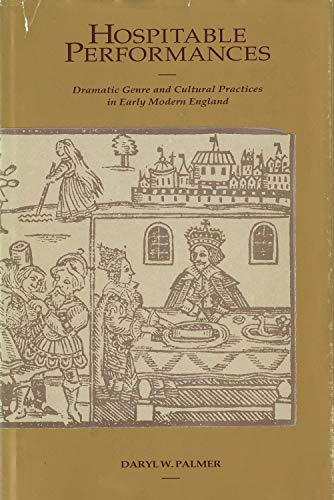 Hospitality is central to Renaissance culture. It accounts for hundreds of vast houses and enormous expenditures of energy and money. Practiced and discussed by members of every social class, hospitality could mean social advancement, marriage, celebration, manipulation - even terrorism. A genuine explosion of popular publication devoted to the period's intense fascination with hospitality coincides with the rise of the English drama, a previously undiscussed connection. For a Renaissance playwright, hospitality's dramatic possibilities were endless and provided an opportunity to debate rank, gender, social responsibility, and political method. This wide-ranging and interdisciplinary study draws on sociology, anthropology, history, and literary theory to examine the practice and the literary re-presentations of hospitality. Palmer offers an original synthesis of dramatic texts from early modern England that gives place to Shakespeare and his contemporaries. The literary texts Palmer uses cover a diverse field, from Shakespearean drama to royal progresses, from court entertainment to pamphlet literature. The genre of pageantry, a more ubiquitous form of entertainment than the more-studied public theater, takes over the heart of the study. Through these various genres, Palmer investigates the notion of mediation, the relationship between aesthetic objects and the culture that produced them.

"This is a welcome contribution to literary scholarship of Renaissance England. The study reveals the interrelationship between a diverse body of literary and cultural materials, and in a fashion that sheds light on the dynamic character of social formations in the early modern period. . . . The reader is struck by the eloquence and mastery of complex materials and theoretical perspectives in a manner that is always both accessible and engaging."

"Its intelligent use of modern critical approaches, its reference to much primary material, and its focus on a motif too little considered recommend it to the reader concerned with Renaissance English drama."

Daryl W. Palmer has written articles and reviews on Renaissance and contemporary drama.

GOR009516102
Hospitable Performances: Dramatic Genre and Cultural Practices in Early Modern England by Daryl W. Palmer
Daryl W. Palmer
Used - Very Good
Hardback
Purdue University Press
1991-12-31
232
1557530149
9781557530141
N/A
Book picture is for illustrative purposes only, actual binding, cover or edition may vary.
This is a used book - there is no escaping the fact it has been read by someone else and it will show signs of wear and previous use. Overall we expect it to be in very good condition, but if you are not entirely satisfied please get in touch with us.