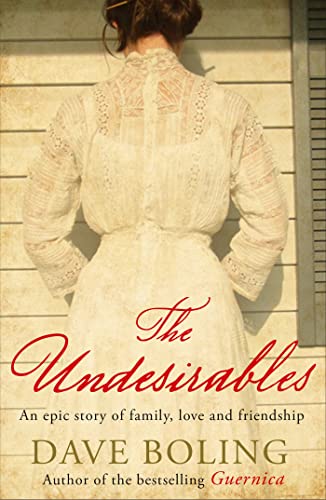 The Undesirables
by Dave Boling

Used Price
$10.99
Free Shipping in the US
The second novel from the author of Guernica (a top ten bestseller and winner of the Richard & Judy Summer Read 2009) is a deeply moving, intimate portrait of family, friendship and love, set against the backdrop of the second Boer war.
Reviews:
Trustpilot
Very Good Good

The Undesirables by Dave Boling

While the vastly outnumbered Boer commandos fight in the field, half a million British soldiers torch a flaming path across the South African veld. As they go, the British imprison thousands of displaced Boer families, including Aletta Venter's, and cast them into newly devised 'concentration camps'.

In a crowded tent with her mother and siblings, Aletta finds ways to cope with the confinement, privation and loss, but searches for the rarest of comforts - a bit of adolescent normalcy, perhaps even the spark of forbidden romance. Her weapon of choice in this personal battle: a young girl's powerful sense of hope.

A deeply moving, intimate portrait of family, friendship and love, set against the backdrop of the Second Boer War at the turn of the twentieth century, The Undesirables (the British term for those who refused to surrender) is the heart-rending yet life-affirming new novel from the top ten bestselling author of Guernica, winner of the Richard & Judy Summer Read.

Dave Boling is the author of Guernica, a top ten bestseller and winner of the Richard & Judy Summer Read 2009 and other international awards.

A Chicago native, Dave Boling is a journalist in the Seattle area.

GOR005965093
The Undesirables by Dave Boling
Dave Boling
Used - Very Good
Paperback
Pan Macmillan
2014-07-31
256
1447233255
9781447233251
N/A
Book picture is for illustrative purposes only, actual binding, cover or edition may vary.
This is a used book - there is no escaping the fact it has been read by someone else and it will show signs of wear and previous use. Overall we expect it to be in very good condition, but if you are not entirely satisfied please get in touch with us.