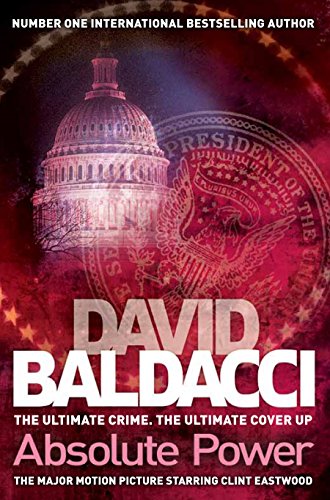 Used Price
$8.99
Free Shipping in the US
The first bestselling thriller from one of the world's greatest storytellers
Reviews:
Trustpilot
Very Good Good

Set in Washington D.C., Absolute Power, the first international bestselling from David Baldacci, is a fascinating thriller of unparalleled suspense that dares to explore an unthinkable abuse of power and criminal conspiracy: a vicious murder involving the US President and a cover-up orchestrated by his zealously loyal Chief of Staff and the Secret Service. But, unknown to the President and his lackeys, one unlikely witness saw everything. Trapped behind a two-way mirror in a country house in Maryland, Luther Whitney, a professional burglar, witnesses an event that destroys his faith in justice. By the time he escapes, pursued by two Secret Service agents, a young woman has been sexually assaulted, then shot dead. And a breathtaking cover-up has been set in motion.

Accomplished and amazing - one of the hottest reads around. * Daily Mail *
Baldacci's prose is fluent and amazing . . . this book is sure to make a killing. * The Times *
A high-octane legal thriller. An almost Shakespearian study in the nature of evil - horror in its purest form. * Spectator *

David Baldacci is the internationally-acclaimed author of multiple bestselling novels including Absolute Power,Total Control, The Winner, The Simple Truth, Saving Faith, Wish You Well, Last Man Standing, Christmas Train, Split Second, Hour Game, The Camel Club, The Collectors and Simple Genius. With his books published in at least 45 different languages, and with over 90 million copies in print, he is one of the world's favourite storytellers. His family foundation, the Wish You Well Foundation, a non-profit organization, works to eliminate illiteracy across America. Still a resident of his native Virginia, he invites you to visit him at www.DavidBaldacci.com, and his foundation at www.WishYouWellFoundation.org.