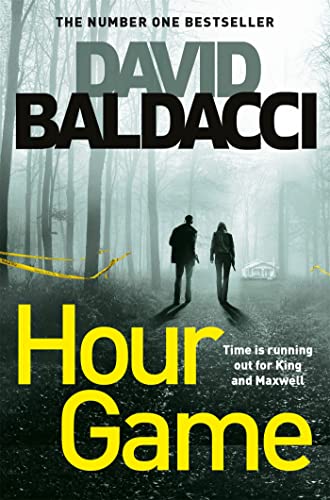 David Baldacci's heart-stopping Hour Game is the second fast-paced thriller in the King and Maxwell series.

Following their collaboration in Split Second, ex-Secret Service agents Sean King and Michelle Maxwell have gone into partnership and are investigating the robbery of some secret documents at the residence of the incredibly wealthy Battle family. It seems like a straightforward case of domestic burglary, but soon they begin to suspect links to larger, more terrifying events now shaking the prosperous town of Wrightsburg . . .

The unidentified corpse of an attractive young woman turns up in the woods; two high school kids, one shot in the back, the other in the face, are found dead in their car; a successful lawyer is discovered stabbed to death in her own home. A serial killer is on the loose. The murderer kills in the manner of famous killers of the past but takes care to leave a stopped watch at the scene of each crime - corresponding to the victim's position on his hit list.

As the killing spree escalates it seems that the fractured Battle family are somehow involved and Maxwell and King suddenly find themselves racing to solve an intricate puzzle, one that is full of tantalizing clues but barren of solid evidence, and one that is leaving even the FBI confounded. And all the while, the body count is rising . . .

Hour Game is followed by Simple Genius, First Family, The Sixth Man and King and Maxwell.

There are terrific action sequences sprinkled throughout, and plenty of suspense * Publishers Weekly *
King and Maxwell are fictional treats, a fabulously entertaining team, and the action is hot and hard * New York Daily News *
The action is suspenseful and relentless * Newark Star-Ledger *

David Baldacci is one of the world's bestselling and favourite thriller writers. With over 130 million copies in print, his books are published in over eighty territories and forty-five languages, and have been adapted for both feature-film and television. He has established links to government sources, giving his books added authenticity. David is also the co-founder, along with his wife, of the Wish You Well Foundation (R), a non-profit organization dedicated to supporting literacy efforts across the US.

GOR010348152
Hour Game by David Baldacci
David Baldacci
King and Maxwell
Used - Very Good
Paperback
Pan Macmillan
2019-11-12
736
1529003326
9781529003321
N/A
Book picture is for illustrative purposes only, actual binding, cover or edition may vary.
This is a used book - there is no escaping the fact it has been read by someone else and it will show signs of wear and previous use. Overall we expect it to be in very good condition, but if you are not entirely satisfied please get in touch with us.