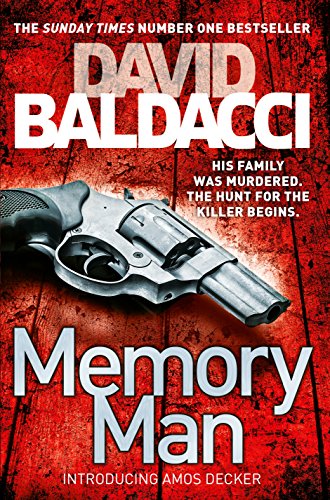 Used Price
$20.99
Free Shipping in the US
His family was murdered. The hunt for the killer begins.
Reviews:
Trustpilot
Very Good

The first in the Amos Decker series, Memory Man is an astounding novel from blockbuster author David Baldacci, where an extraordinary man races to hunt down a terrible killer.

Amos Decker would forever remember all three of their violent deaths in the most paralyzing shade of blue. It would cut into him at unpredictable moments, like a gutting knife made of colored light. He would never be free from it.

When Amos Decker returned home eighteen months ago to find the bodies of his wife and only daughter, he didn't think he could carry on living. Overwhelmed with grief, he saw his life spiral out of control, losing his job as a detective, his house and his self-respect. But when his former partner in the police, Mary Lancaster, visits to tell him that someone has confessed to the murder of his family, he knows he owes it to his wife and child to seek justice for them.

As Decker comes to terms with the news, tragedy strikes at the local school. Thirteen teenagers are gunned down, and the killer is at large. Following the serious brain injury Amos suffered as a professional footballer, he gained a remarkable gift - and the police believe that this unusual skill will assist in the hunt for the killer.

Amos must endure the memories he would rather forget, and when new evidence links the murders, he is left with only one option.

Memory Man will stay with you long after the turn of the final page.

The page-turner of the season * The Times *
Baldacci is still peerless * Sunday Times *
One of the world's biggest-selling thriller writers, Baldacci needs no introduction . . . Brilliant plotting, heart-grabbing action and characters to die for * Daily Mail *
Baldacci inhabits the skin of his creations - tripping us up with unexpected empathy and subtle identification * Sunday Express *

GOR006714465
Memory Man by David Baldacci
David Baldacci
Amos Decker series
Used - Very Good
Paperback
Pan Macmillan
2015-04-23
416
1447277805
9781447277804
N/A
Book picture is for illustrative purposes only, actual binding, cover or edition may vary.
This is a used book - there is no escaping the fact it has been read by someone else and it will show signs of wear and previous use. Overall we expect it to be in very good condition, but if you are not entirely satisfied please get in touch with us.