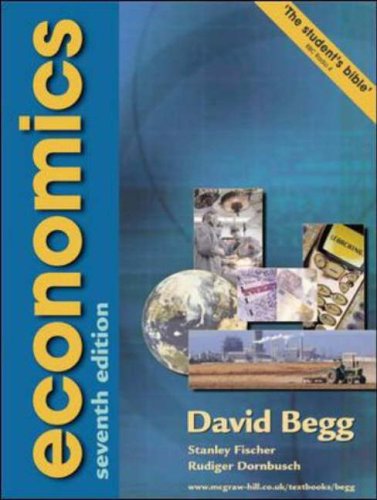 In Stock
$11.69
This edition aims to teach students how economics really works in the world. Its approach to modern macroeconomics reflects the shifts in monetary and fiscal policy in the UK, Europe and beyond.
Very Good
Only 4 left

David Begg is Principal of the Tanaka Business School at Imperial College London. He has been a Research Fellow of the Centre for Economic Policy Research (a network of leading European economists) since its inception in 1984. David's research focuses mainly on monetary policy, exchange rates, monetary union, and economic transition. He is a Research Fellow of the Centre for Economic Policy Research. He co-authored several of the CEPR annual reports in the series he helped found: Monitoring the European Central Bank, and Monitoring European Integration. The 1997 MEI Report, EMU: Getting the Endgame Right, changed the policy that the European Union adopted to launch the euro in 1999. He was also founding Managing Editor of Economic Policy, now an official journal of the European Economic Association.

1. Economics and the economy
2. Tools of economic analysis
3. Demand, supply, and the market

GOR001228294
Economics by David Begg
David Begg
Used - Very Good
Paperback
McGraw-Hill Education - Europe
2002-06-01
576
0077099478
9780077099473
N/A
Book picture is for illustrative purposes only, actual binding, cover or edition may vary.
This is a used book - there is no escaping the fact it has been read by someone else and it will show signs of wear and previous use. Overall we expect it to be in very good condition, but if you are not entirely satisfied please get in touch with us.