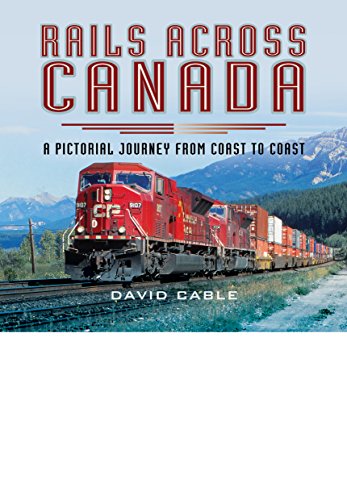 Rails Across Canada
by David Cable

Used Price
$22.99
Free Shipping in the US
David Cable has journeyed across Canada, extensively photographing the Network of both the large and small operators
Very Good

Rails Across Canada by David Cable

The railways of Canada, like the network in the U S A, have a fascination to many people, both in North America and those who live elsewhere. The origins of the Canadian network are somewhat different to that of the U S A, in that it was originally largely projected and funded from Britain, as part of the British Empire. The two major networks being The Canadian National and The Canadian Pacific, both of which operated large networks across the whole of the country. In addition to rail operation, The Canadian Pacific owned and operated a sizable fleet of cargo and passenger ships, between Canada and Europe. Canada also had some smaller operators who ran services in odd corners of the country, like The Prince Edward Island Railway and The Newfoundland Railway. David Cable has journeyed across Canada, extensively photographing the Network of both the large and small operators, often recording scenes in the most obscure locations.

"If modern diesels and electrics float your boat enough to cross the Atlantic, these books are for you. A snapshot of what is out there, and if it is your scene, both books are buyers' delights"--Railway Magazine
"An interesting snapshot of Canadian railroading over the last twenty-five years."--Continental Modeller (09/01/1026)

David Cable was born in 1929, and lives in Hartley Wintney, Hampshire. He has had an interest in trains since the age of three, which developed into an interest in train photography in 1947. David is the author of many photo albums, covering modern traction in the UK since the 1960s, as well as volumes based on his visits to the other countries over the last 40 years. He has visited countries throughout Europe, North America and Australia, as well as some Far Eastern countries and Morocco.

GOR008614375
Rails Across Canada by David Cable
David Cable
Used - Very Good
Hardback
Pen & Sword Books Ltd
2015-10-05
208
1473838061
9781473838062
N/A
Book picture is for illustrative purposes only, actual binding, cover or edition may vary.
This is a used book - there is no escaping the fact it has been read by someone else and it will show signs of wear and previous use. Overall we expect it to be in very good condition, but if you are not entirely satisfied please get in touch with us.