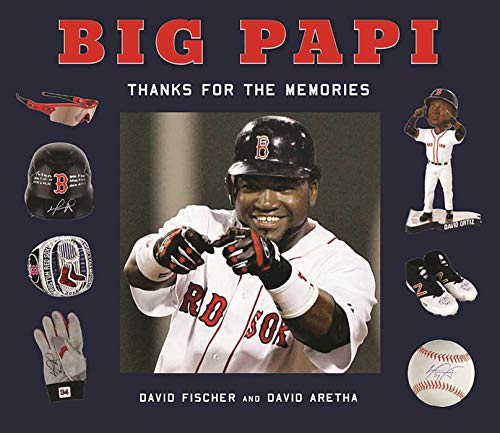 Big Papi: David Ortiz, Thanks for the Memories by David Fischer

David Ortiz first won over the Fenway faithful in 2003 with his monstrous home runs, beaming smile, big hugs, and kind heart. The following fall, he proved heroic, belting walk-off hits in Games 4 and 5 of the ALCS in an epic series comeback over Jeter's Yankees. His legendary feats helped the Red Sox end the 86-year-old "Curse of the Bambino" and deliver a World Series title to Boston. In the largest gathering in American history of any kind 3 million fans cheered Ortiz & Co. in the World Series victory parade. "Big Papi" has walloped over 500 home runs and led Boston to two more world titles. In 2013, following the Boston Marathon bombings, he epitomized "Boston Strong" by crushing a series-turning grand slam in the ALCS and blasting .688 in the World Series, earning MVP honors.

Authors David Fischer and David Aretha celebrate this David's career in a fully illustrated, scrapbook-style album with prose as passionate as Big Papi himself. Included too are dozens of personal anecdotes and recollections about Ortiz from prominent members of the Red Sox organization and the Boston community. Supreme photography and treasures from the Baseball Hall of Fame rarely seen photographs and artifacts enhance the nostalgic experience. This unique collection captures the magic of David Ortiz, one of the greatest heroes the game has ever known.

Skyhorse Publishing, as well as our Sports Publishing imprint, are proud to publish a broad range of books for readers interested in sports books about baseball, pro football, college football, pro and college basketball, hockey, or soccer, we have a book about your sport or your team.

Whether you are a New York Yankees fan or hail from Red Sox nation; whether you are a die-hard Green Bay Packers or Dallas Cowboys fan; whether you root for the Kentucky Wildcats, Louisville Cardinals, UCLA Bruins, or Kansas Jayhawks; whether you route for the Boston Bruins, Toronto Maple Leafs, Montreal Canadiens, or Los Angeles Kings; we have a book for you. While not every title we publish becomes a New York Times bestseller or a national bestseller, we are committed to publishing books on subjects that are sometimes overlooked by other publishers and to authors whose work might not otherwise find a home.

David Fischer has written for the New York Times and Sports Illustrated Kids and has worked at Sports Illustrated, National Sports Daily, and NBC Sports. He is the author of The Super Bowl: The First Fifty Years of America's Greatest Game and Derek Jeter #2: Thanks for the Memories. He also coauthored Sports of the Times and Greatest Sports Rivalries.

David Aretha is the author and editor of more than forty baseball books. He edited Fenway Park: The Centennial and coedited The Love of the Red Sox and Boston Red Sox: Yesterday & Today. He wrote a documentary on Fenway's one-hundredth anniversary that was narrated by Carlton Fisk, and he penned the cover story for Keep the Faith, MLB's official commemorative magazine of Boston's 2004 World Series title. He also has written dozens of David Ortiz baseball cards for Topps.

GOR009534755
Big Papi: David Ortiz, Thanks for the Memories by David Fischer
David Fischer
Used - Very Good
Hardback
Sports Publishing LLC
2016-09-06
144
1613219652
9781613219652
N/A
Book picture is for illustrative purposes only, actual binding, cover or edition may vary.
This is a used book - there is no escaping the fact it has been read by someone else and it will show signs of wear and previous use. Overall we expect it to be in very good condition, but if you are not entirely satisfied please get in touch with us.