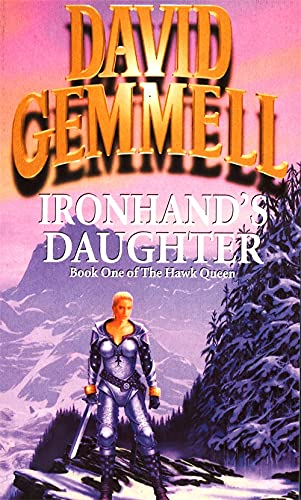 Used Price
$9.19
Free Shipping in the US
The first book of The Hawk Queen - a sweeping epic of heroic fantasy
Reviews:
Trustpilot
Very Good Good

After the bloody battle of Colden Moor the warlike highlanders had lost their independence. They lived in surly subservience to the Outlanders, and only a teenage girl survived to represent the line of kings: Sigarni.

Sigarni the silver-haired. Huntress, princess. All of these she was called. But those who pierce the veil of the future knew that a leader was coming to the North - a leader descended from Ironhand, mightiest of the highland kings.

David Gemmell's first novel, LEGEND was published in 1984, beginning his acclaimed Drenai saga. He was widely regarded as Britain's king of heroic fantasy. He died in July 2006.

GOR001281541
Ironhand's Daughter by David Gemmell
David Gemmell
Hawk Queen
Used - Very Good
Paperback
Little, Brown Book Group
1995-10-19
288
1857238516
9781857238518
N/A
Book picture is for illustrative purposes only, actual binding, cover or edition may vary.
This is a used book - there is no escaping the fact it has been read by someone else and it will show signs of wear and previous use. Overall we expect it to be in very good condition, but if you are not entirely satisfied please get in touch with us.