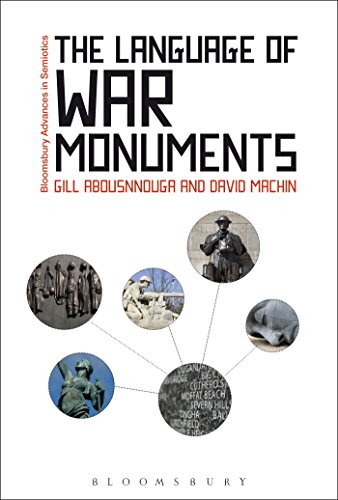 The Language of War Monuments
by David Machin

The Language of War Monuments Summary

The Language of War Monuments by David Machin

This book analyses war monuments by developing a multimodal social-semiotic approach to understand how they communicate as three-dimensional objects. The book provides a practical tool-kit approach to how critical multimodal social semiotics should be done through visual, textual and material analysis. It ties this material analysis into the social and political contexts of production. Using examples across the 20th and 21st century the book's chapters offer a way of analysing the way that monument designers have used specific semiotic choices in terms of things like iconography, objects, shape, form, angularity, height, materials and surface realisation to place representations of war in public places across Britain. This social-semiotic approach to the study of war monuments serves three innovative purposes. First, it provides a contribution to the work on the ideological representations of war in Media and Cultural Studies and in Critical Discourse Analysis applied specifically to more banal realisations of discourse. Second, it responds to calls by historians for innovative ways to study war commemoration by providing an approach that offers both specific analysis of the objects and attends to matters of design. Thirdly, following in the relatively recent tradition of multimodal analysis, the arguments draw on the ideas of Kress and van Leeuwen (1996, 2001), adapting and extending their theories and models to the analysis of British commemorative war monuments, in order to develop a multimodal framework for the analysis of three dimensional objects.

The Language of War Monuments Reviews

Few studies in multimodality have a social critical edge. Few studies in critical discourse analysis tackle multimodal discourse. This book shows how to bridge the gap. -- Theo van Leeuwen, Dean of the Faculty of Arts and Social Sciences, University of Technology, Sydney, Australia
Thanks to Abousnnouga and Machin, we can no longer keep our eyes wide shut. Their sophisticated yet accessible theoretical framework brings war memorials to life for us like no other study. And like all good books about war should, it makes a timely and indisputable case against it. Highly recommended. -- Adam Jaworski, Professor of Language and Communication, The University of Hong Kong, Hong Kong
I can't speak highly enough of this book. The Language of War Monuments is a rare thing in that it represents a true advance in semiotic and discourse analysis. Abousnnouga and Machin demonstrate the theoretical rigour and analytic vitality of Multimodal Critical Discourse Analysis and - most importantly - offer a thorough empirical examination of commemorative war monuments, the ways they cover over or ignore appalling effects of war, and so the ways they function to legitimise war discourses. Packed with contextual and comparative detail throughout, Abousnnouga and Machin's systematic analysis simultaneously demystifies the features and materials of war memorials (and whose interests they support) and offers a toolbox we can apply when examining the semiotics of material objects more generally. Readers will not be able to view war memorials in the same way ever again. -- John Richardson, Senior Lecturer in Communication and Media Studies, Loughborough University, UK

David Machin, Department of Media and Communication Studies, OErebro Unversity, Sweden. His books include Global Media Discourse (2007), Introduction to Multimodal Analysis (2007) Analysing Popular Music (2010) and The Language of Crime and Deviance (2012). He is co-editor of the journal Social Semiotics. Gill Abousnnouga works in the School of Journalism, Media and Cultural Studies at Cardiff University, UK. She has published numerous papers in international peer reviewed journals on war memorials using a multimodal approach.

1. Introduction 2. Researching Monuments 3. A Social Semiotic Approach to Three Dimensional Objects 4. The Social Goings on Behind Monuments 5. The Iconography of the War Monument 6. Form and Materials 7. Roles and Actions: the Case of Women 8. Word, Image and Materiality: The Role of the Inscription Conclusion Bibliography Index

GOR010330267
The Language of War Monuments by David Machin
David Machin
Bloomsbury Advances in Semiotics
Used - Very Good
Paperback
Bloomsbury Publishing PLC
2014-10-23
248
1474224202
9781474224208
N/A
Book picture is for illustrative purposes only, actual binding, cover or edition may vary.
This is a used book - there is no escaping the fact it has been read by someone else and it will show signs of wear and previous use. Overall we expect it to be in very good condition, but if you are not entirely satisfied please get in touch with us.