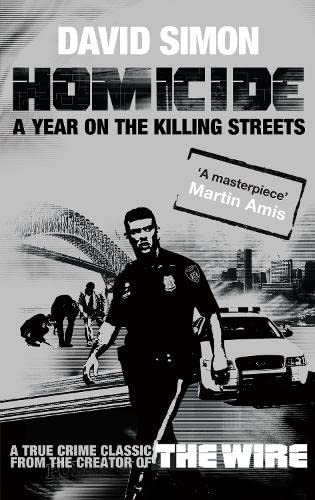 Used Price
$10.69
Free Shipping in the US
A True Crime classic from the creator of THE WIRE
Reviews:
Trustpilot
Very Good Good

Homicide: A Year On The Killing Streets by David Simon

The scene is Baltimore. Twice every three days another citizen is shot, stabbed, or bludgeoned to death. At the centre of this hurricane of crime is the city's homicide unit, a small brotherhood of men confronted by the darkest of American visions. David Simon was the first reporter ever to gain unlimited access to a homicide unit, and his remarkable book is both a compelling account of casework and an investigation into our culture of violence. The narrative follows Donald Worden, a veteran investigator nearing the end of his career; Harry Edgerton, an iconoclastic black detective in a mostly white unit; and Tom Pellegrini, an earnest rookie who takes on the year's most difficult case, the brutal rape and murder of an eleven-year-old girl.

A masterpiece...[Simon] has exceptional literary gifts of eye and ear. Few novelists have written so well about the corrosiveness of the modern American city. * * Martin Amis * *
David Simon has single handedly raised the bar for writing about crime, crime-fighting and the messy and imprecise business of justice to new and nearly unreachable levels. Like the WIRE, which was easily the finest dramatic series in the history of television, a work of tremendous ambition which made everything in the genre to follow irrelevent. * * Tony Bourdain * *
The best book about homicide detectives by an American writer. * * Norman Mailer * *
Simon does an extraordinary job of getting under the skin and into the minds of the police officers. * * New York Times Book Review * *
Remarkable...A True Crime Classic...a journalistic masterpiece of a brutal, bloody, bewildering year in the Baltimore Police Department's homicide unit. * * Associated Press * *
A reporter who keeps his wits about him...A very good book. * * The New Yorker * *
Simon has captured the poetry of the meanest streets. * * Los Angeles Times * *
Certainly one of the most engrossing police procedural mystery books ever written, not only because the crimes and plots and personalities are real, but because Simon is a terrific writer who has mastered the necessities and nuances of his material. * * Newsday * *
The world of urban violence has never been so well portrayed, nor has the day-to-day craft of the detective. * * Chicago Tribune * *
Virtually ignored by TV schedulers and audiences in the UK, David Simon's uncompromising crime drama 'The Wire' has fan a devoted fan base on DVD in September. At the same time Canongate bring us a new UK edition of the book that started it all, David Simon's True Crime classic HOMICIDE. Unavailable for 15 years and a great read in its own right, he follows Baltimore's homicide department over the course of a year. This new 'Wire'-inspired jacket is sure to appeal to fans. * * The Bookseller * *
Simon followed a group of Baltimore detectives through a year on the mean streets. The resulting book is a hefty volume, giving Simon cope for a huge amount of detail and it's this, I think, that makes it such compulsive reading. How the detectives work - the crime they dace, the casual murders, the hopeless lives - all seen through Simon's eyes and those of the detectives he follows so closely. Homicide became the inspiration behind the TV series The Wire, which I've not seen, but who needs fiction when factual writing is as good as this? * * Publishing News * *
Homicide flows with the episodic drive of the best fiction, but Simon is too good a reporter to miss the real stories. ... Simon's genius is that through his cops he tells the victims' story. The picture is overpowering. ... Homicide is a 'non-fiction' to rank with Mailer's Executioner's Song or Capote's In Cold Blood, dissecting an entire failed city, and shining a light on the shadows haunting an entire country. -- Michael Carson * * Spectator * *
An amazing piece of dramatic reportage...the access Simon enjoyed is incredible and he records everything he sees with vivid brilliance. He doesn't miss a thing and his descriptive prose brings to extraordinary life every rank squadroom, street corner and murder scene he is scrupulous witness to. -- Allan Jones * * Uncut * *

David Simon's Homicide won the Edgar and Anthony awards and became the basis for the NBC award-winng drama. Simon's second book, The Corner: A Year in the Life of An Inner-City Neighbourhood, co-authored with Edward Burns, was made into an Emmy-winning HBO miniseries. Simon is currently an executive producer and writer for HBO's Peabody Award-winning series THE WIRE. He lives in Baltimore.

GOR001234741
Homicide: A Year On The Killing Streets by David Simon
David Simon
Used - Very Good
Paperback
Canongate Books Ltd
2008-09-04
656
1847673112
9781847673114
N/A
Book picture is for illustrative purposes only, actual binding, cover or edition may vary.
This is a used book - there is no escaping the fact it has been read by someone else and it will show signs of wear and previous use. Overall we expect it to be in very good condition, but if you are not entirely satisfied please get in touch with us.