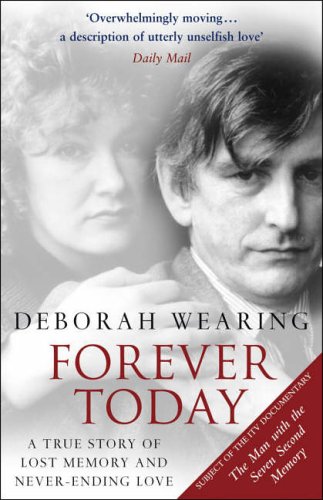 In Stock
$11.69
Clive Wearing has one of the most extreme cases of amnesia ever known. As damaged as Clive was, the musical part of his brain seemed unaffected, as was his passionate love for Deborah, his wife. But she found she could never love another the way she loved Clive.
Like New Very Good Good
Only 1 left

Forever Today: A Memoir Of Love And Amnesia by Deborah Wearing

Clive Wearing has one of the most extreme cases of amnesia ever known. In 1985, a virus completely destroyed a part of his brain essential for memory, leaving him trapped in a limbo of the constant present. Every conscious moment is for him as if he has just come round from a long coma, an endlessly repeating loop of awakening. A brilliant conductor and BBC music producer, Clive was at the height of his success when the illness struck. As damaged as Clive was, the musical part of his brain seemed unaffected, as was his passionate love for Deborah, his wife. For seven years he was kept in the London hospital where the ambulance first dropped him off, because there was nowhere else for him to go. Deborah desperately searched for treatments and campaigned for better care. After Clive was finally established in a new special hospital, she fled to America to start her life over again. But she found she could never love another the way she loved Clive. Then Clive's memory unaccountably began to improve, ten years after the illness first struck. She returned to England. Today, although Clive still lives in care, and still has the worst case of amnesia in the world, he continues to improve. They renewed their marriage vows in 2002. This is the story of a life lived outside time, a story that questions and redefines the essence of what it means to be human. It is also the story of a marriage, of a bond that runs deeper than conscious thought.

"This is a harrowing, haunting and heartening book - a loss-story which is also a love story. It takes us deep inside the question of what it means to be human." -- Andrew Motion
"Sometimes terrifying, sometimes very funny, and always deeply moving, Deborah Wearing's beautifully written testament to a love that survives all the ravages of her husband's amnesia is a book to seize the heart." -- Lindsay Clarke, author of the Whitbread winning The Chymical Wedding
"A remarkable book: absorbing, moving and humbling." -- Fay Weldon
"Loving, terrifying and often extremely funny, an astonishing voyage into the very heart of what makes us human." -- Deborah Moggach
"I had the privilege of filming a documentary about Deborah and Clive and like the rest of the crew I was immediately struck with the extraordinary patience and affection with which Deborah dealt with this appalling ordeal. In Forever Today she takes us further than ever into this remarkable experience." -- Jonathan Miller

Deborah Wearing campaigned for specialist services for brain-injured people and helped found a national charity, the Amnesia Association (merged in 1991 with Headway). She now works as a communications officer in the NHS.

GOR010578431
Forever Today: A Memoir Of Love And Amnesia by Deborah Wearing
Deborah Wearing
Used - Like New
Paperback
Transworld Publishers Ltd
2005-09-17
400
0552771694
9780552771696
N/A
Book picture is for illustrative purposes only, actual binding, cover or edition may vary.
The book has been read, but looks new. The book cover has no visible wear, and the dust jacket is included if applicable. No missing or damaged pages, no tears, possible very minimal creasing, no underlining or highlighting of text, and no writing in the margins.