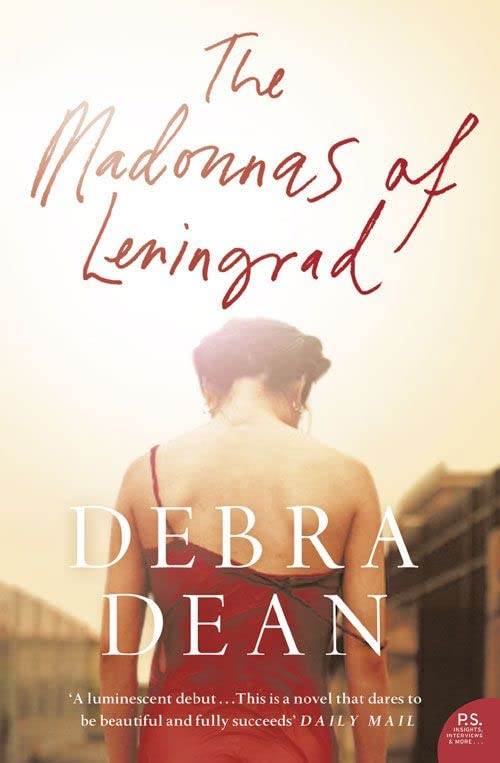 The Madonnas of Leningrad
by Debra Dean

A brilliant and moving debut novel about one woman's struggle to preserve an artistic heritage from the horrors and destruction of World War II, and the ensuing lifelong memories from this extraordinary experience.

The Madonnas of Leningrad Summary

The Madonnas of Leningrad by Debra Dean

A brilliant and moving debut novel about one woman's struggle to preserve an artistic heritage from the horrors and destruction of World War II, and the ensuing lifelong memories from this extraordinary experience.

In this extraordinary first novel by Debra Dean, the siege of Leningrad by German troops in World War II is echoed by the destructive siege against the mind and memory of an elderly Russian woman.

Marina, the woman in question, was a guide at Leningrad's famous Hermitage Museum. In the late autumn of 1941, as the Luftwaffe roared over and around Leningrad, she and her colleagues were set the task of taking the thousands of priceless paintings, sculptures and objets d'art out of the grand galleries of the former Tsarist Palace and storing them safely against the German bombardment and seemingly inevitable invasion.

The German assault threatened to destroy a large part of Europe's artistic history: if Leningrad fell to the Germans, everything that was not destroyed would be looted and given to the Nazis. Marina, whose own parents had disappeared during Stalin's persecution of intellectuals in the 1930s, clings to her hope of becoming an art historian through her job at the Hermitage.

The novel shifts between Marina's experiences at the Hermitage during the siege of Leningrad and her current existence as a very old lady in America whose mind has begun to fray. Debra Dean depicts, with subtle skill, how Marina's mind, already ravaged by disease, picks up some incident, object or person at the wedding she's been brought to, and flips back to the dreadful year-and-a-half in Leningrad which has informed her life ever since.

The Madonnas of Leningrad Reviews

`An unforgettable story of love, survival and the power of imagination in the most tragic circumstances. Elegant and poetic, the rare kind of book that you want to keep but you have to share.' Isabel Allende

`A luminescent debut... "The Madonnas of Leningrad" recalls Jonathan Franzen's "The Corrections" and deserves similar success. This is a novel that dares to be beautiful and fully succeeds.' Daily Mail

`The real achievement of Dean's novel lies beyond descriptions of Alzheimer's, sensitive and elegantly done though they are...[Dean] has brought the siege of Leningrad to dramatic, desperate life...this breathtaking novel shows that epiphanies can take place anywhere.' Guardian

`A taut and boldly unsentimental tale, Dean's glistening debut plumbs the twin mysteries of memory and the imagination.' Observer

`An extraordinary debut, a deeply lovely novel that evokes with uncommon deftness the terrible, heartbreaking beauty that is life in wartime...Dean's exquisite prose shimmers with a haunting glow, illuminating us to the notion that art itself is perhaps our most necessary nourishment.' Chang-Rae Lee, New York Times Bestselling author of `Aloft'

Debra Dean worked as an actor in the New York theatre for nearly a decade before opting for the life of a writer. She lives with her husband in Seattle, where she teaches literature and writing. This is her first novel.

GOR001231887
The Madonnas of Leningrad by Debra Dean
Debra Dean
Used - Very Good
Paperback
HarperCollins Publishers
2007-06-04
288
0007215061
9780007215065
N/A
Book picture is for illustrative purposes only, actual binding, cover or edition may vary.
This is a used book - there is no escaping the fact it has been read by someone else and it will show signs of wear and previous use. Overall we expect it to be in very good condition, but if you are not entirely satisfied please get in touch with us.