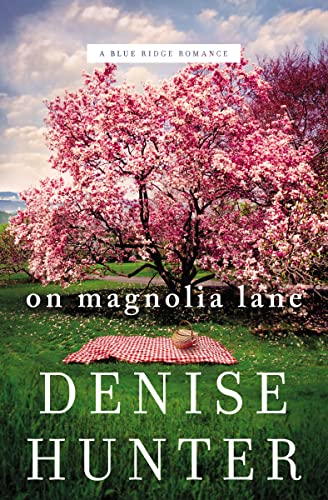 On Magnolia Lane
by Denise Hunter

Out of Stock
$9.69
From the bestselling author of The Convenient Groom (now a beloved Hallmark Original movie) comes the final book in Hunter's Blue Ridge Romance series.
Like New
Only 0 left

On Magnolia Lane by Denise Hunter

Falling in love with Daisy was easy for Jack. But finding the courage to tell her becomes problematic when his secret feelings lead to even bigger complications.

From the bestselling author of The Convenient Groom and A December Bride (now beloved Hallmark Original movies) comes the final book in the Blue Ridge Romance series.

After two years of counseling sessions with Daisy Pendleton, Pastor Jack McReady has earned a permanent spot in her life as a spiritual leader-and nothing more. Jack would never risk losing her trust by exposing the depths of his heart, but he's hopelessly in love with her.

Daisy loves her southern small-town life and her job at her family-run flower shop, but she doesn't have the thing she longs for most: someone to share it with. Her recent foray into online dating has been a disaster-until she meets TJ.

Jack could kill his friend Noah for using his initials and some indistinct photos to set up a profile on the dating app Daisy is using. But when he's finally afforded the opportunity to show her a different side of himself, he's sucked into the plan before he has time for second thoughts.

Online, Daisy shares some of her greatest fears with TJ, but in person, Jack and Daisy are spending more time together. When a devastating family secret surfaces, Daisy knows that only her trusted friend and counselor can bring her comfort. Jack wants nothing more than to be both men for Daisy, but revealing his secret will prove to be the ultimate test of Daisy's grace.

"I have never read a romance by Denise Hunter that didn't sweep me away into a happily ever after. Treat yourself!" -Robin Lee Hatcher, bestselling author of Who I Am with You

"Move over You've Got Mail because in Denise Hunter's On Magnolia Lane you've got an e-romance with enough RAM (romance and magic) not only to sputter your software, but to tug at your heart while touching your soul. Easily one of the top romance writers in the CBA, Hunter is a master at inspirational love stories that linger in one's memory-and hard drive-long after the last page." -Julie Lessman, award-winning author

'. . . the author's writing is splendid in laying the foundation for grace, building anticipation toward a climax when redemption is the only answer, and leaving readers satisfied and inspired.' * Hope by the Book *
'In Hunter's endearing final installment to her Blue Ridge Romance series. . . simple romance reveals both sides of a modern, single pastor -- the spiritual guide and the ordinary man looking for a partner.' * Publishers Weekly *

Denise Hunter is the internationally published bestselling author of more than 25 books, including A December Bride and The Convenient Groom, which have been adapted into original Hallmark Channel movies. She has won The Holt Medallion Award, The Reader's Choice Award, The Carol Award, The Foreword Book of the Year Award, and is a RITA finalist. When Denise isn't orchestrating love lives on the written page, she enjoys traveling with her family, drinking green tea, and playing drums. Denise makes her home in Indiana where she and her husband are rapidly approaching an empty nest. To learn more about Denise, visit her website DeniseHunterBooks.com; Facebook: AuthorDeniseHunter; Twitter: @DeniseAHunter; Instagram: deniseahunter.

GOR010521555
On Magnolia Lane by Denise Hunter
Denise Hunter
A Blue Ridge Romance
Used - Like New
Paperback
Thomas Nelson Publishers
2018-12-13
320
0718090543
9780718090548
N/A
Book picture is for illustrative purposes only, actual binding, cover or edition may vary.
The book has been read, but looks new. The book cover has no visible wear, and the dust jacket is included if applicable. No missing or damaged pages, no tears, possible very minimal creasing, no underlining or highlighting of text, and no writing in the margins.