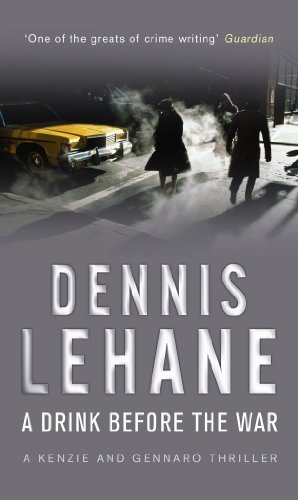 A Drink Before The War
by Dennis Lehane

In Stock
$10.99
Patrick Kenzie and Angela Gennaro are tough private investigators who know the blue-collar neighbourhoods and ghettos of Boston's Dorchester section as only natives can.
Like New Very Good Good
Only 1 left

A Drink Before The War Summary

A Drink Before The War by Dennis Lehane

Patrick Kenzie and Angela Gennaro are tough private investigators who know the blue-collar neighbourhoods and ghettos of Boston's Dorchester section as only natives can. Working out of an old church belfry, Kenzie and Gennaro take on a seemingly simple assignment for a prominent politician: to uncover the whereabouts of Jenna Angeline, a black cleaning woman who has allegedly stolen confidential Statehouse documents. But finding Jenna proves easy compared to staying alive. The investigation escalates, uncovering a web of corruption extending from bombed-out ghetto streets to the highest levels of state government. With slick, hip dialogue and a lyrical narrative pocked by explosions of violence, A Drink Before the War confronts a city in which institutionalized bigotry and corruption are often the norm, and the true nature of 'racial incidents' is rarely clear. Dennis Lehane's remarkable debut is at once a pulsating crime thriller and a mirror of our world, one in which the worst human horrors are found closest to home, and the most vicious obscenities are committed in the name of love.

A Drink Before The War Reviews

"Hip, and with a plot in overdrive, relentlessly violent and cathartic" * Time Out *
"Truly excellent" * Daily Telegraph *

Dennis Lehane was born and raised in Dorchester, Massachusetts. He has written seven novels, A DRINK BEFORE THE WAR, DARKNESS, TAKE MY HAND, SACRED, GONE BABY GONE, PRAYERS FOR RAIN, MYSTIC RIVER, SHUTTER ISLAND and a short story collection, CORONADO. MYSTIC RIVER was turned into an Oscar-nominated film, directed by Clint Eastwood and starring Sean Penn, Kevin Bacon and Tim Robbins. Before becoming a full-time writer, Mr Lehane worked as a counsellor with mentally handicapped and abused children, waited tables, parked cars, drove limos, worked in bookstores, and loaded tractor-trailers. His one regret is that no one ever gave him a chance to tend bar. He lives in the Boston area.

GOR008545011
A Drink Before The War by Dennis Lehane
Dennis Lehane
Used - Like New
Paperback
Transworld Publishers Ltd
2006-09-01
336
0553818228
9780553818222
N/A
Book picture is for illustrative purposes only, actual binding, cover or edition may vary.
This is a used book - there is no escaping the fact it has been read by someone else and it will show signs of wear and previous use. Overall we expect it to be in very good condition, but if you are not entirely satisfied please get in touch with us.