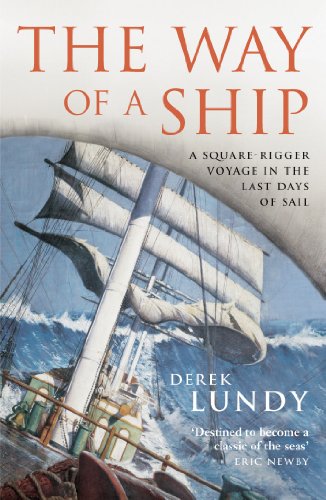 The Way of a Ship
by Derek Lundy

In Stock
$7.39
Benjamin Lundy crossed oceans under sail in the late nineteenth century and over one hundred years later Derek Lundy, his great-great nephew, has re-created that journey.
Like New Very Good
Only 1 left

The Way of a Ship Summary

The Way of a Ship: A Square-Rigger Voyage in the Last Days of Sail by Derek Lundy

Benjamin Lundy crossed oceans under sail in the late nineteenth century and over one hundred years later Derek Lundy, his great-great nephew, has re-created that journey. In The Way of a Ship he places Benjamin on board the Beara Head with a community of fellow seamen as they perform the exhausting and dangerous work of sailing a square-rigger across the Atlantic and round Cape Horn. Derek Lundy adorns his story of an extraordinary journey with a profound knowledge of the sea and sailing, and reminds us that the ocean voyage under sail is an overarching metaphor for life itself.

The Way of a Ship Reviews

"A seaman himself, Lundy interpolates his own experiences under sail, nicely contrasting modern-day standards and mindsets with 19th-century conditions and attitudes" * The Times *
"Lundy, too, has saltwater in his blood and his knowledge of the most arcane seafaring terms and traditions, coupled with careful research on 19th-century square-rigger voyages, makes this a tremendously elucidating, frequently thrilling read-he writes with verve and authority" * Sunday Telegraph *
"With this book Lundy leaps into the front ranks of maritime historians" * Sunday Times *
"An exceptionally rich and satisfying weave. Hoisting sail aboard his ship Beara Head in 1885, Lundy sails her on an enthralling voyage through maritime literature, history, sociology and folklore... Heir to the tradition of Dana, Melville and Conrad" -- Jonathan Raban
"Excellent... Lundy has researched the subject deeply and writes about it with feeling... Powerful, convincing and enthralling" * Times Literary Supplement *

Derek Lundy is an experienced amateur sailor. A lawyer by training and a writer by profession, he has published four books, including the international bestseller Godforsaken Sea: Racing the World's Most Dangerous Waters. He lives in Salt Spring Island, British Columbia.

GOR010752295
The Way of a Ship: A Square-Rigger Voyage in the Last Days of Sail by Derek Lundy
Derek Lundy
Used - Like New
Paperback
Vintage Publishing
2003-07-03
464
0099286629
9780099286622
N/A
Book picture is for illustrative purposes only, actual binding, cover or edition may vary.
The book has been read, but looks new. The book cover has no visible wear, and the dust jacket is included if applicable. No missing or damaged pages, no tears, possible very minimal creasing, no underlining or highlighting of text, and no writing in the margins.