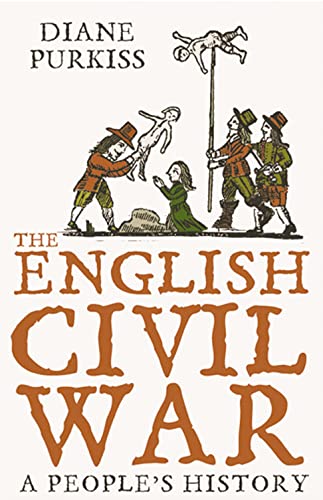 This popular history of the English Civil War tells the story of the bloody conflict between Oliver Cromwell and Charles I from the perspectives of those involved.

The English Civil War: A People's History by Diane Purkiss

This popular history of the English Civil War tells the story of the bloody conflict between Oliver Cromwell and Charles I from the perspectives of those involved.

The compelling narrative draws on new sources such as letters, memoirs, ballads and plays to bring to life the Roundheads and Cavaliers, the foot soldiers, war widows and witchfinders of one of the most significant turning points in British history, culminating in Oliver Cromwell's triumph and the execution of Charles I.

By blending the political and the personal, Diane Purkiss illuminates both the ideologies behind the English Civil War and the fears of those who fought in it; the men who were destroyed by the conflict and those, such as Oliver Cromwell, who were defined by it.

'Rich, vivid and passionate...a moving, lyrical and principled piece of writing...Purkiss has a gift for evocation.' Independent

'You begin to get close to what it would have been like to live through the nine momentous years from 1640 to 1649...it would be hard to imagine anything more irresistible than this rich layer cake of a book, crammed with the stories and the voices that make history human.' Guardian

'Purkiss has an eye for the narrative vignette that can illuminate the age.' Sunday Times

'Wonderful...Purkiss offers a sumptuous portrait gallery of the men and women who lived, wrote and died during this turbulent period...A joyous read.' Daily Telegraph

'This book vigorously brings the horror and humanity of the conflict to life.' Financial Times

'Light in touch, though grounded in an enormous wealth of documentary material this "people's history" shows how England's men and women coped with quite extraordinary times.' Scotsman

Diane Purkiss is Fellow and Tutor at Keble College, Oxford. She was formerly Professor of English at Exeter University. She is the author of the highly acclaimed 'The Witch in History', and 'Troublesome Things: A History of Fairies and Fairy Stories'.

GOR001240000
The English Civil War: A People's History by Diane Purkiss
Diane Purkiss
Used - Very Good
Paperback
HarperCollins Publishers
2007-02-05
400
0007150628
9780007150625
N/A
Book picture is for illustrative purposes only, actual binding, cover or edition may vary.
This is a used book - there is no escaping the fact it has been read by someone else and it will show signs of wear and previous use. Overall we expect it to be in very good condition, but if you are not entirely satisfied please get in touch with us.