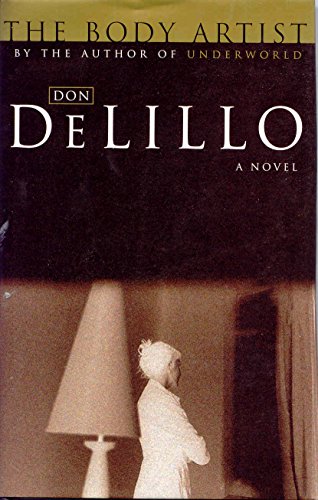 The Body Artist
by Don DeLillo

In Stock
$21,99
A stunning, spare novel by the bestselling, award-winning author of White Noise and Underworld.
Very Good Good
7 in stock

The Body Artist by Don DeLillo

The Body Artist opens with a breakfast scene in a rambling rented house somewhere on the New England coast. We meet Lauren Hartke, the Body Artist of the title, and her husband Rey Robles, a much older, thrice-married director. Through their delicate, intimate, half-complete thoughts and words DeLillo proves himself a stunningly unsentimental observer of marriage, and of the idiosyncrasies that both isolate and bind us.

Rey says he's taking a drive and he does, all the way to the Manhattan apartment of his first wife, where he shoots himself. Lauren is left alone, or so she thinks. She is soon to discover, however, that there is a stranger in the house. An eerily gifted individual who often speaks in Rey's voice or in her own, who knows both intimate moments of their past life and things that haven't yet happened.

DeLillo moves from one extreme to the other with his new novel. Whereas his last book Underworld was a densely woven, 900-page American epic spanning the entire period of the Cold War, The Body Artist is sparse, sharply focused and weighs in at a slim-line 150 pages. Whether it's a reaction to the critics who perceived Underworld as overlong or a realisation that he covered all the "big" themes in his previous work, DeLillo admirably refuses to retread the past. What we have instead is a portrait of an upper middle-class, East Coast marriage disintegrating into the husband's suicide and the wife's attempts to understand their relationship. The economy of the writing proves to be deceptively simplistic and the underlying theme of man's relationship with time is effectively explored. This may disappoint some new readers (indeed, many were disappointed by Underworld), but the full hardback price suggests that only hardcore DeLillo enthusiasts will pay the cost of admission.

Don DeLillo is the author of many bestselling novels, including Point Omega, Falling Man, White Noise, Libra and Zero K, and has won many honours in America and abroad, including the National Book Award, the PEN/Faulkner Award for Fiction, the Jerusalem Prize for his complete body of work and the William Dean Howells Medal from the American Academy of Arts and Letters for his novel Underworld. In 2010, he received the PEN/Saul Bellow Award. He has also written several plays.

GOR001244781
The Body Artist by Don DeLillo
Don DeLillo
Used - Very Good
Hardback
Pan Macmillan
2001-02-23
192
0330484958
9780330484954
N/A
Book picture is for illustrative purposes only, actual binding, cover or edition may vary.
This is a used book - there is no escaping the fact it has been read by someone else and it will show signs of wear and previous use. Overall we expect it to be in very good condition, but if you are not entirely satisfied please get in touch with us.