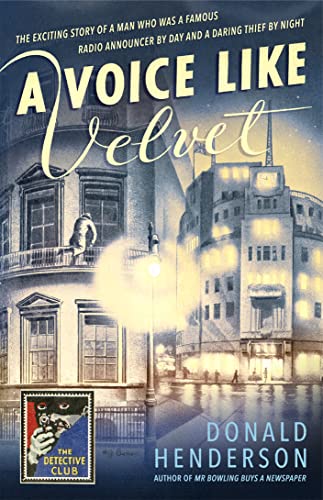 A sensational wartime crime novel about a BBC announcer who abuses his position to commit crimes against the rich and famous...

A sensational wartime crime novel about a BBC announcer who abuses his position to commit crimes against the rich and famous...

By day Ernest Bisham is a velvet-voiced announcer for the BBC; the whole country recognises the sound of his meticulous pronouncements. By night, however, Mr Bisham is a cat-burglar, careless about his loot, but revelling in the danger and excitement of his running contest with Scotland Yard. But as he gets away with more and more daring escapades, there will come a time when he goes too far . . .

When Donald Henderson's Mr Bowling Buys a Newspaper caused something of a sensation, his publishers were keen to capitalise on their author's popularity, quickly reissuing The Announcer (originally published under his pen-name `D. H. Landels') with the more alluring title A Voice Like Velvet. Despite a small edition of just 3,000 copies, it was his best reviewed work, as suspenseful and offbeat as his earlier success.

This Detective Club classic includes an introduction by The Golden Age of Murder's Martin Edwards, who explores Henderson's own BBC career and the long established tradition of books about gentlemen crooks. The book also includes a rare Henderson short story, the chilling `The Alarm Bell'.

`Ah, just the sort of book I like'-Daily Express

`People who have a weakness for stories about gentlemen crooks-and judging by the popularity of Raffles, Get-Rich-Quick Wallingford, etc., there are thousands of them-will be delighted to make the acquaintance of Ernest Bisham.'-Random House

Donald Landels Henderson was born in 1905; he later said, `I cannot pretend to have enjoyed anything very much about my childhood or adolescence.' Henderson was an actor and combined writing with his acting career, before taking a job at the BBC, where he worked throughout the Second World War. He died at only 41, in 1947, just three years after the publication of Mr Bowling Buys a Newspaper.

GOR010715483
A Voice Like Velvet (Detective Club Crime Classics) by Donald Henderson
Donald Henderson
Detective Club Crime Classics
Used - Like New
Hardback
HarperCollins Publishers
2018-08-20
240
0008265348
9780008265342
N/A
Book picture is for illustrative purposes only, actual binding, cover or edition may vary.
The book has been read, but looks new. The book cover has no visible wear, and the dust jacket is included if applicable. No missing or damaged pages, no tears, possible very minimal creasing, no underlining or highlighting of text, and no writing in the margins.